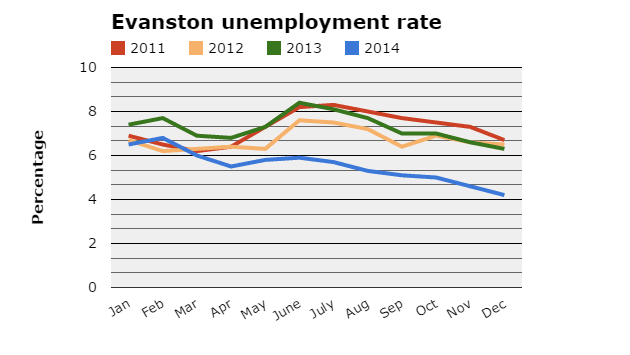 Evanston's jobless rate continued to drop as 2014 drew to a close raching 4.2 percent in December a drop of more than two percentage points from a year earlier.

Of the just over 100 communities in Illinois with more than 25,000 residents, 19 had jobless rates lower than Evanston in December. That's down from 25 with better rates in November.

The lowest jobless rate in the state — 3.3 percent — was found in Northbrook. Downers Grove, Elmhurst and Glenview were at 3.5 percent. Wheaton and Wilmette were at 3.6 percent.

The worst jobless rates in the state last month were in Round Lake Beach at 10.9 percent, East St. Louis at 10.6 percent, Kankakee at 10.4 percent and Belvidere at 10.2 percent.