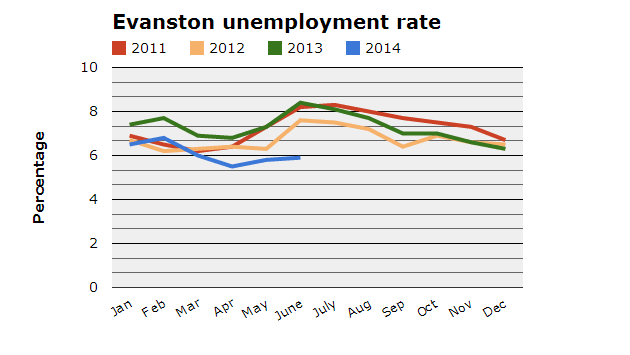 Evanston's jobless rate rose a tenth of a percent in June, to 5.9 percent, but the increase was much less than that seen in June earlier in this decade.

A year ago, Evanston's jobless rate was 8.4 percent

Figures released today by the Illinois Department of Employment Security show that of the more than 100 cities in the state with over 25,00 residents, 22 had jobless rates lower than Evanston last month — with the lowest rate, 4.8 percent, recorded in Glenview.

Among the other towns with lower rates were Highland Park and Northbrook at 5.1 percent and Arlington Heights, Mount Prospect, Oak Park and Wilmette, all at 5.3 percent.

Across all of Illinois, the jobless rate was 7.1 percent in June, down from 7.2 percent in May, and those were the same as the numbers for the Chicago metro area. A year ago, the statewide and metro area figures were just under 10 percent.