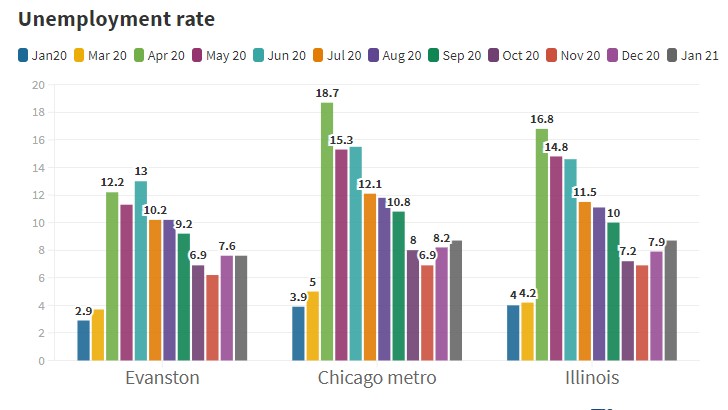 Figures released this noon by the Illinois Department of Employment Security show that Evanston’s jobless rate in January — 7.6% — was unchanged from revised figures for the month before.

But no change was better than the result for the Chicago metro area and the State of Illinois as a whole. Both saw the jobless rate rise to 8.7%.

The January numbers here are more than 2.5 times the jobless rate of 2.9% a year ago, with the increase blamed on pandemic-induced layoffs across many industry sectors.

The size of the Evanston labor force — those working or actively looking for work — decreased by 222 people — to 26,195. The IDES reported 2,767 Evanstonians were looking for work in January, that’s a decline of two from December.

Skokie’s jobless rate in January was 7.9%, unchanged from December. Wilmette’s rate was 6.7%, down from 7.2% in December.