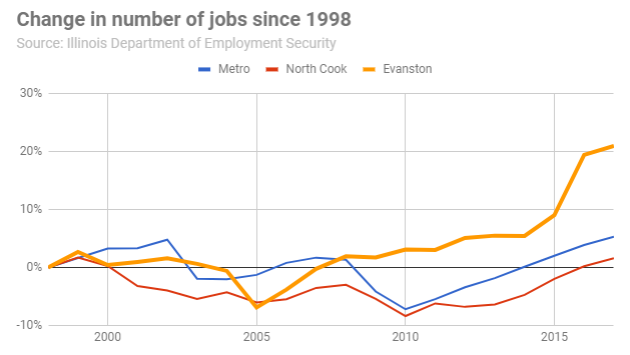 Figures released today by the Illinois Department of Employment Security indicate that the number of jobs in Evanston continued to grow last year, though at a slower pace than in the recent past.

The Where Workers Work figures indicate that Evanston has 20 percent more jobs than it did two decades ago, while the metro area’s job count is up just five percent and the average increase for northern Cook County suburbs is just two percent.

Big increases have been seen during that period in several categories:

The biggest increase in employment — perhaps 2,000 to 3,000 jobs — appears to be at Northwestern University, although the exact numbers there are unclear because it’s the only “educational services” entity in the city, and the state doesn’t detail numbers for any category in which there is only one provider.

The jobs figures do not include public sector employment, and the IDES cautions that employers are not required to specify the work site location for their employees — so some workers reported as working in a community may actually be working elsewhere.