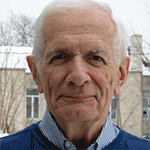 McClory, with his snowy white hair, wry humor and keen sense of social justice, was a storyteller who looked for the heroes in everyday life, ordinary people trying to do the right thing. To him, they exemplified what he called the “Great Truths” — love and hate, success and failure, loyalty and betrayal.

McClory died of complications from a blood disorder. He was respected by his Medill colleagues and throughout the journalistic world for his thought-provoking articles on civil rights and human experience, according to a profile in Northwestern magazine’s spring 2002 issue.

“What makes a good story is the ability to touch honestly — without phoniness — on the great realities,” McClory explained in the article. “You don’t get those unless you really take the time to ask the questions and listen.

“Deep down,” he observed, “everyone wants to tell you his or her story.”

A 1971 master’s degree graduate of Medill, McClory taught at the school on a full-time or part-time basis since 1983, and he became one of Medill’s most honored faculty members. His students and colleagues remembered him as a peerless educator who taught them how to make a difference and left a lasting impression on their lives and careers.

Roger Boye, ’71 MS, emeritus associate professor in service and longtime Medill assistant dean and director of Medill’s undergraduate program, described McClory as “a kind, patient, thoughtful teacher, the taskmaster with a velvet heart. His lessons transcended journalism. He taught students how to have a life worth living.”

Mary Lou Song, ’91, CEO of FUEL451 and former Northwestern trustee, said, “I’ll always be grateful to Bob for asking me the tough question that shocked me into taking a good, hard, honest look at my life ambitions. That was a turning point in my college career. He inspired me to always do my very best and to shoot for the moon.”

Cynthia Wang, ’93, veteran People magazine writer and longtime Medill instructor in Northwestern’s “Cherubs Program” for high school journalists, noted: “So sad to hear this news. Bob was my magazine writing professor and my Teaching Magazine (academic internship) adviser. What he taught me, I teach to Cherubs and carry with me throughout my career and life.”

Before entering journalism, McClory was a priest of the Archdiocese of Chicago, serving at several parishes and as a lecturer at Loyola University. He was a co-founder and former board member of the Call to Action organization.

In a story posted after his death by the National Catholic Reporter, he was described by his editors as “a fluid writer, a disciplined and diligent reporter who earned the readership’s respect” and as “a journalist with a passion for justice, a person able to find humor in all things.”

In an obituary, a former colleague, Medill Professor Emeritus Abe Peck, who hired McClory in 1983, said, "Bob was so encouraging, especially with our younger students.

“He could teach the basics, and when he had criticism, it was always tempered criticism that a student wouldn't forget,” Peck noted. “He'd always pick a student up, and that student would go forward and write that great story.”

Though he worked mainly as a magazine writing teacher, McClory also taught freshman and sophomore writing classes. He judged numerous journalism competitions and was for many years a coordinator of summer programs on religion and media for graduate students.

He was a recipient in 1999 of the Excellence in Teaching Award from the Northwestern University Alumni Association.

McClory began his journalism career with The Chicago Defender as reporter, feature writer and city editor. He had since been a staff writer for the Chicago Reader and the National Catholic Reporter and a contributor to many publications, including Chicago magazine, the Chicago Tribune and U.S. Catholic magazine.

He was the author of several books, including “Radical Disciple: Father Pfleger, St. Sabina Church and the Fight for Social Justice,” “The Man Who Beat Clout City,” “Racism in America,” “Turning Point: The Inside Story of the Papal Birth Control Commission” and “As It Was in the Beginning: The Coming Democratization of the Catholic Church.”

He was co-author of the play “Haunted by God: The Life of Dorothy Day.”

Among the tributes that poured into McClory’s Facebook page after his passing was this one from Father Pfleger: “Bob was a Gift to my life, who in a church where passion for Justice seems to be fading to nonexistence, Bob was a consistent voice…he took his natural gifts of humor, wisdom and a passion for justice and continued to speak for the voiceless and demand the Church be who she was called to be……I will forever be grateful for his voice, encouragement and friendship…..welcome home my friend…..”

McClory’s journalism work won awards from a variety of journalism associations over the years, including Women in Communications, the Chicago Headline Club, Associated Church Press, the Catholic Press Association and the National Academy of Television Arts and Sciences. He is a member of the Medill Hall of Achievement.

Robert Joseph McClory was raised in the Garfield Park neighborhood on Chicago’s West Side and grew up in an environment he described as “middle-class Catholic and lower-class Jewish.” His father was a postal worker, and young Robert attended a Catholic grammar school, according to the Northwestern magazine article.

From his childhood, priests represented authority figures and leaders in the community. “They were a sort of higher-up, something to aspire to,” recalled McClory. He entered Quigley Preparatory Seminary for high school and went on to study at St. Mary of the Lake Seminary in Mundelein, Illinois.

McClory spent seven years in the sequestered atmosphere, where students studied philosophy and theology, mostly in Latin, and needed permission to leave the premises. They were expected to remain in silence from 9 p.m. until breakfast the following morning. In 1958, he was ordained.

After leaving the seminary, McClory asked to be sent to an African-American parish in Chicago, where he felt he could do the most good. “I don’t know where the impulse came from, because my parents weren’t social activists," he told the magazine. "I always just wanted to help the underdog."

Eventually he got his chance, when he transferred to St. Sabina, a church in the South Side neighborhood of Auburn-Gresham.  It was an all-white parish, but in his nearly seven years at St. Sabina, McClory learned some powerful lessons on race relations.

The years saw an influx of African-Americans to the area, leading to widespread white flight. The tensions erupted in a number of violent incidents, and, while the church leadership attempted to bring the two communities together, the rift would not mend. By the time McClory left St. Sabina, Auburn-Gresham was 95 percent African-American. McClory not only left his position, he also left the priesthood.

“The reasons can’t really be separated,” he explained in the magazine article. “It was a combination of a few things.” He had come to disagree with some of the church’s positions and no longer felt that he could be the voice of an organization with which he didn’t fully agree. He also met Margaret McComish, the St. Sabina school principal with whom he had worked closely during the racial turmoil.

“We worked so well together that we decided to keep doing it,” he recalled. The two married in November 1971, after McClory had been officially “dispensed by the pope” from his priestly obligations. In 1972, their daughter, Jennifer, was born. Seeking a new profession, McClory was unsure what his next step should be. He had an avid interest in writing and literature and decided that journalism would be a good fit.

The students of Medill were the beneficiaries.

Jenny Hontz, ’93, former Variety writer and now journalism adviser at Harvard-Westlake High School in Los Angeles, said, “I took Bob’s magazine class and always found him to be one of the kindest, classiest people I encountered at Medill.”

Noted former colleague Peck, chair of Medill’s magazine program, “Bob was a gentle man, a fine author, a passionate advocate, a teacher beloved by students and a mellow, yet inspirational, colleague.”

Abigail Foerstner, ’71, ’72 MS, a Medill assistant professor, declared, “Bob is going to continue to inspire us and all those countless students whose lives he so influenced.

“One student wrote on a review of a lecture (Bob had given), ‘I want Bob McClory to adopt me!’”