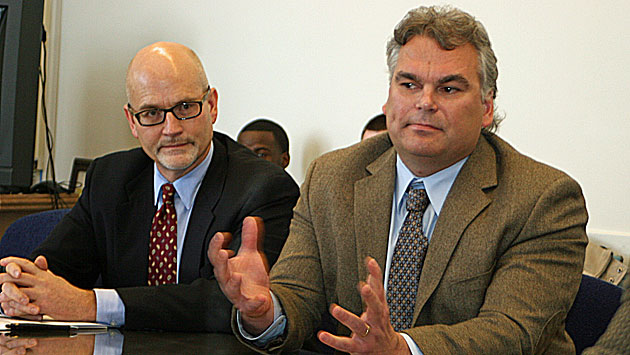 Tom Migon, owner of The Keg of Evanston, reportededly has appealed the revocation of the bar's liquor license by the city to the state liquor control commission.

Tom Migon, owner of The Keg of Evanston, reportededly has appealed the revocation of the bar's liquor license by the city to the state liquor control commission.

The Daily Northwestern quotes Migon and his attorney, Todd Stephens, as confirming that the appeal had been filed.

The hearing was called after 17 people were arrested for underage drinking at the bar on Jan. 6, and the very next night police were able to make three more arrests there for the same offense.

City Attorney Grant Farrar also presented evidence from social media sites that the bar was widely believed to be a place where underage patrons could readily be served liquor, and argued that Migon had not taken sufficient steps to prove those claims wrong.

In her order revoking the bar's license Jan. 30, Mayor Elizabeth Tisdahl recounted a history of 147 citations issued at the business since 2005, including 111 for alcohol-related violations.

But she also said that, "The Keg, through its use of social media, expressly incited, encouraged, and assisted underage patrons in coming to The Keg and consuming alcohol."

Since it was never established at the hearing that The Keg controlled any of the social media outlets cited by the city, some legal observers have suggested that that gap will form the basis of the bar's appeal.