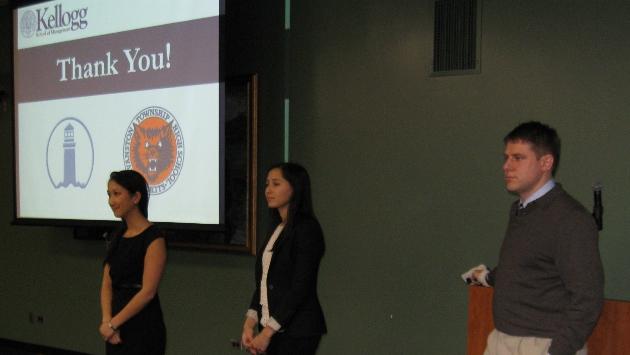 School district consolidation in Evanston does not have to be an all-or-nothing affair, board members were told Wednesday. There are plenty of opportunities for improvement along the way.

That was the message delivered by a group of savvy students at Northwestern University’s Kellogg School of Management who took on the issue as an independent study project.

The students—Rachel Levy, James Rowan, and Sonia Siu, operating under the supervision of Professor Therese McGuire—delivered their report to a joint board collaboration committee of Evanston/Skokie District 65 and Evanston Township High School District 202, with top administrators of both districts in attendance.

For years, the assumption has been that consolidating the two districts into one poses insurmountable political and labor problems, but that there are ways the two districts can work together that will improve the outcome of the students who spend their kindergarten through eighth grade years in District 65 before moving on to District 202 for high school .

This operating model has been given the name “virtual consolidation.”

The Kellogg students spent considerable time analyzing the Lake Forest model, whereby two districts seven years ago hired a single superintendent and essentially merged the administrative staffs into one while still maintaining a legal separation of two districts, each with its own elected board and taxing authority.

While most taxpayers see consolidation as an obvious cost-saving measure, the students focused their inquiry on the education issues that suggest improvement in the process for both the students and their parents, who often find the shift from the elementary schools to the high school to be a jarring experience.

In particular, both districts are struggling with an achievement gap in test scores between students of different ethnic backgrounds that show a wide disparity among white students as a group when compared with students from predominantly African-American or Latino families.

The two districts have recently begun a literacy project designed to provide a “cradle-to-career” continuum in the process for increasing literacy skills.

The Kellogg students suggested that additional opportunities for collaboration could do much to improve the educational outcomes for all students.

In the Lake Forest model, they noted, the two districts operate under one superintendent and four assistant superintendents—one for business services; a second for curriculum, instruction, technology, and assessment; a third for human resources; and a fourth for finance.

Within that framework, there are some departments that operate with a combined staff while others have separate staffs operating under a single manager.