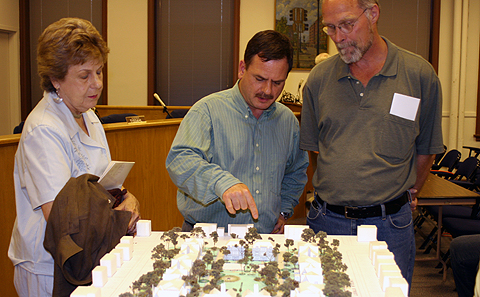 The City Council’s Planning and Development Committee approved a newly revised plan for redeveloping the Kendall College site at a special meeting tonight.

Neighbors look over a model of the Smithfield Properties proposal.

The developer, Smithfield Properties, agreed to eliminate four of eight duplex units in its proposal, which also calls for building 16 single family homes on the block-square site at 2408 Orrington Ave.

Robert Buono, a principal with Smithfield, also said that, after meetings with neighbors, his firm has reworked designs for the houses to make them more compatible with nearby homes.

Some neighbors testified in support of the revised plan.

Tom Gemmell of 720 Colfax said he and other neighbors directly across from the property had opposed Smithfield’s plans vehemently when the developer wanted many more units, but now, he said, “the plan is down to what we consider a reasonable density.”

However, other neighbors, including William McClure of 12 Milburn Park, argued that no multi-family units should be included.

“I see no reason why the city should permit such spot zoning,” Mr. McClure said, “Mixing R3 and R1 would put the neighborhood at great peril.”

“It would be deterimental to overall housing values and the whole atmosphere of northeast Evanston,” he said.

A third group of residents argued for saving some of the Kendall College buildings.

Jim McGuire of 2241 Sherman Ave., representing the Northeast Evanstion Historic District Association, argued that the century-old college administration building, Wesley Hall, should be turned into condominiums, and that at least two of the old homes on the site should be rehabilitated.

“Clearcutting the block would be a step back to the 1950s and 60s when Evanston rushed into development decisions that it came to regret,” he said.

Alderman Steve Bernstein, 4th Ward, said neighbors’ talk of spot zoning amounted to a threat to sue the city if it approves the project.

This is not spot zoning, he said. “We are downzoning this site from U1, a far more intensive zoning. There’s other U1 property and R5 as well as R1 areas adjacent to it,” he said, “to say its surrounded entirely by R1 is disingenuous.”

Alderman Ann Rainey, 8th Ward, challenged the claim that R3 zoning would harm the Kendall neighborhood. “We have very diverse housing stock and zoning districts in our residential neighborhoods in Evanston. What you’re really saying to some of us is ‘We wouldn’t want to live where you live, because the zoning denegrates your community.’ That isn’t the kind of thing that good neighbors say.”

The aldermen voted 6-2 to approve a zoning map change for the proposed development, with Aldermen Cheryl Wollin, 1st Ward, and Elizabeth Tisdahl, 7th Ward voting against it. Both said they favored an all-single family home project.

The aldermen approved the planned development proposal 7-1 with only Ald. Tisdahl voting against that. Alderman Edmund Moran, 6th Ward, was absent from the meeting.

Because neighbors opposed to the project gathered sufficient petition signatures, the zoning map change will require a favorable vote of seven alderman when the project comes before the full City Council.

Before that vote, city staff will work with the developer to resolve several outstanding issues including the size of a contribution to the city’s affordable housing fund, promises regarding hiring of Evanston residents to build the homes and a schedule for completion of the project.

Mr. Buono said it could take six years to finish the development because the homes will be built with custom design specifications for each buyer. But he promised to complete demolition at the site within roughly six months and plant grass to improve the site’s appearance while the development process is underway.