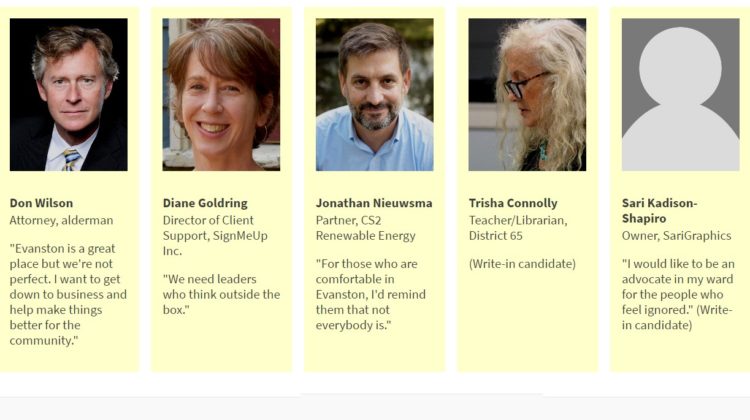 Five candidates are running for 4th Ward alderman in the Feb. 23 primary, with the top two finishers to face each other in the April 6 general election.

Evanston Now asked the candidates to respond to questions about several key issues in the city. Write-in candidate Trisha Connolly declined to be interviewed. Here are the responses we got from the other four contenders.

QUESTION: Do you support the 7% reduction in sworn police staff implemented this year by City Council? Do you favor more police staffing reductions in the future, and if so, what would you do with the money should there be any savings?

DONALD WILSON (Incumbent): Supports 2021 reduction. “Generally speaking I’d like to continue a trend of getting police away from non-core activities.” Restorative justice and victim services already out of police budget. “We need to be more introspective on when we call the police.” If the budget “naturally goes down” over time, money could be used for social and mental health services. However, need to realize that police costs could actually go up for improved training and equipment.

JONATHAN NIEUWSMA: Public safety budget should be “within community priorities.” The 7% cut is “a step in the right direction.” Money from future cuts should go to community development and social services either within or outside PD. Need to “demilitarize the police.” Does not want layoffs to be part of any budget reduction.

DIANE GOLDRING: Supports 7% cut. “Our budget is skewed heavily towards police and policing. Police are asked to do too much.” Would like more than $200,000 for mental health response team (Cahoots program). Money could be reallocated for such a program. We “don’t always need an officer with a gun” in certain situations.

SARI KADISON-SHAPIRO: Would like to “reapportion” some of the police budget for psychological and social services. However, “I don’t want the police to think we don’t appreciate them. We have a pretty woke police department.”

NIUEWSMA: Look at city’s procurement and purchasing to see if such purchases can be used to “keep wealth local.” Develop Evanston as a destination for arts and entertainment. Tax incentives on case-by-case basis. Zoning- review on “high strategic level” rather than one parcel/project at a time. Revamp City Plan so it is not a “document on a shelf that no one looks at.”

GOLDRING: “Not all businesses have suffered equally” during the pandemic. City needs to support local associations such as Main/Dempster Mile. Make Evanston “more walkable,” although not necessarily give tax breaks for this. There should be a “zoning audit of the city.” Zoning needs to be “rationalized rather than done piecemeal.”

KADISON-SHAPIRO: Wants “moratorium on high rises.” Realizes city needs to balance the budget but “not this way,” even if high rises revenue. Focus on bringing in smaller shops and stores. Would favor tax breaks and subsidies for small businesses, such as health clubs which “improve the quality of life.”

WILSON: Favors use of incentives. Should “loosen restrictions” on sites to allow home-based businesses and certain retail uses. “Have to be open to being different,” as the economy is changing. City has “transitioned away” from subsidies to help landlords. Supports providing small businesses and entrepreneurs with “small grants to help them get off the ground.” Open to tax breaks, but primarily for smaller, independent stores such as wine shops which face high Evanston alcohol tax.

QUESTION: What specific programs, if any, do you favor to increase the amount of affordable housing in Evanston, and should any city subsidy be involved?

KADISON-SHAPIRO: “It’s not working right now.” What developers think is affordable is not. Wants to hear from impacted neighbors if city considers increasing the number of unrelated people who can live in a dwelling. OK on zoning changes for additional-unit dwellings in single family areas.

WILSON: Small in-fill buildings are “very expensive to construct” and provide no equity for renters. If developers want to add housing, should “avoid anything that destroys market rate affordable housing.” “We did that properly with the Albion” in 4th ward. Supports getting more $ into affordable housing fund, but “we have to approve some of the large developments, as government can only tax residents so much.” OK with 2-3 unit flats in single family zones but may be too costly. Ok with tiny houses. Property owners might want to add those, would not require city subsidy.

NIEUWSMA: “We can ask more of developers,” as this is a “highly desirable community.” Can take a “harder line in negotiations” to have developers add more affordable housing directly as opposed to payments into city fund. Increasing the number of units per building in a single-family zone is “something I’d consider.” Reparations program is also “part of the housing solution.”

QUESTION: Do you think that the recent 1% property tax increase, the lowest in many years, was too high? If you would like a tax cut, what services would you reduce due to lower revenue. Do you see any untapped sources of revenue, including the sale of city assets such as perhaps the Civic Center?

KADISON-SHAPIRO: “Taxes are too high.” “Have to get more money from Northwestern, they need to pay more for city services.” Opposes sale of civic center. Could sell “a place on Church Street people want out, a biohazard, a waste plant.” Could become “a different revenue stream.” [Evanston Now Note: The waste transfer station on Church Street is privately owned, not owned by the City].

WILSON: “The hard part is saying you want a tax cut but nobody wants to cut services.” Costs go up more than 1% per year. On council that held property tax hike to 1% for this year. If the economy rebounds from COVID might be able to avoid tax future increases, but not likely to be able to lower it. If sell city assets, “should not use the sale proceeds to fund operations” but rather use the money for repairs/capital investments/reduce debt. Should not sell revenue producers such as parking. Willing to consider sale of the Civic Center. Getting more money from Northwestern requires “diplomatic solution.”

NIEUWSMA: “Nobody likes paying taxes. But I also expect a lot out of local government.” Should try to spend more efficiently before considering any cuts. Citywide “public engagement is critical” on possible Civic Center sale, not just input from residents of that ward. Sale of the Civic Center could be a “possibly creative opportunity to add some reasonably priced housing, stabilize the budget, and bring city services downtown where they are more accessible.” Not in favor of selling assets “just to make payroll.” Would consider sale of recycling center, which is currently being used for storage by the city.

GOLDRING: Issue is “always the sticky wicket, where people seem to go silent.” Don’t know how we can raise revenue without more from Northwestern. “I don’t know how Northwestern can get away with that. It’s shameful, and I’m a Kellogg grad.” Should look at how other cities similar to Evanston get additional money from universities, such as New Haven, Connecticut with Yale. Ask NU large donor alums to pressure the university to provide more money to Evanston. No problem with sale of Civic Center, but “have to find a buyer.”

QUESTION: Do you favor increasing the reparations program/fund, leaving it the same, reducing it, or even eliminating it?

WILSON: “Comfortable with leaving the funding as is.” “Excited about how the program will work,” focusing on “housing irregularities which did hurt the Black community.” “We can never adequately address a past harm, but we have to start somewhere.” Need to make sure it that “access to the program is not excessively burdensome.” “Open to expanding beyond housing” but must be tied specifically to ways people were harmed.

NIEUWSMA: “Proud to live in a community which is on the cutting edge.” New revenue would come from additional marijuana dispensaries if Evanston gets more. “I don’t think people like me should decide how the money should be spent.” Will support recommendations of reparations committee, and if that is to give direct cash payments to qualified Black residents, would back that.

GOLDRING: Supports program, “no question.” Would like fund to be bigger, but question is how? Cash payments to recipients would be “ideal,” but tax implications could be negative. That needs to be addressed at federal level. “We’re the first in the U.S., there’s no model to go off of.”

KADISON-SHAPIRO: Favors leaving funding amount and source for now. “Revisit it later and see what is appropriate.”

QUESTION: Are there any 4th Ward specific issues you would like to mention?

NIEUWSMA: The ward has “a little bit of almost everything which makes Evanston unique” — part of downtown, local business districts, parks, residential neighborhoods. “Everything happening in Evanston is happening in the 4th Ward. Robert Crown Center — has been controversial due to cost, but would rather look forward than look back.

GOLDRING: “Pitting wards against each other is not the way to govern.” There are some “hyper local” issues such as lighting on streets and interstates, dark intersections. Speed bumps needed on Greenwood between Asbury and Wesley. Concerned over a house where shots fired at Asbury and Ridge.

KADISON-SHAPIRO: Start snow plowing at 7 a.m. instead of 4 a.m. on primary routes to reduce noise, or perhaps do it at 11 p.m. Allow well-behaved dogs to accompany owners during outdoor dining. “Transition zoning” should be respected so “high rises are not suddenly right near Victorian houses.”

WILSON: “Critical need” to improve traffic safety on Ridge Avenue. City has gotten grant for staff work on turn lane configuration/signal light timing. “Want to see that through to completion.” Housing is citywide issue but also in 4th Ward: maintain market rate affordable housing/not displace any such housing, bring in alternative uses on empty lots such as accessory dwellings and tiny houses.

QUESTION: A survey by “Evanston Now” about how well city government serves residents’ needs saw a majority of respondents saying they were at least reasonably satisfied, on a scale of 1-7. If you are a non-incumbent, how do you convince voters to elect you many people are satisfied with how things are now? If you are an incumbent, do the survey results indicate that changes are not needed?

GOLDRING: “My own research” from talking with citizens shows different level of satisfaction/dissatisfaction with city services than the Evanston Now survey did. Need to talk less about satisfaction and more about “inertia,” the lack of a sense of the need for change.

KADISON-SHAPIRO: “I think we have a lot of ordinances on the books that are not being enforced.” Some departments are better than others. Wants city to have a dog beach. “I wish firefighters would not leave engines running to stay cozy.”

WILSON: There are “definitely some things we could be doing differently.” Some issues he tried to get through council but they were not OK’d. Need to bring down community energy usage/encourage alternative forms versus simply utilizing credits. Try process of “deliberative democracy,” a working group of citizens focusing on specific issues so people have more input in decision making, rather than just speaking for a minute at a council meeting.

NIUESMA: “Evanston is good for a lot of people, but as good as we are, we need to do better.” “Middle age white guy does not have the same experiences as a young Black guy.” Should not “just go back to the way it was.” Wants to make it a priority to “address climate change and our carbon footprint.” Make utility aggregation long term, not 1-3 year contract.