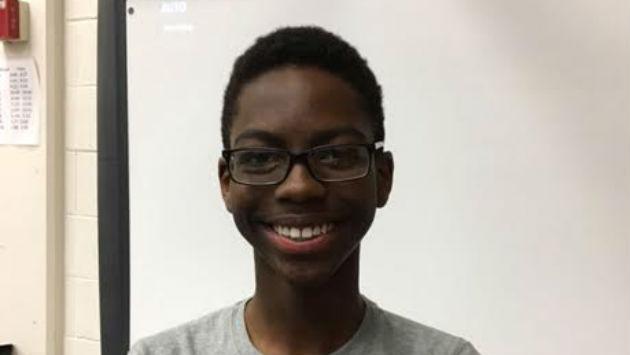 When Evanston’s  Dr. Martin Luther King Jr. Literary and Fine Arts School put on its spring band concert last month, one of the numbers that received rave reviews was the Boom Symphony, written and conducted by eighth grader Howard Godfrey.

Howard orchestrated 21 different instrument parts in his composition, and also did all of his own transpositions for instruments that play in different keys, a feat that would be  considered an amazing and impressive accomplishment for any composer, let alone one who is still in middle school.

“It started as a melody in my head,” Godfrey said, “and then I used a music app and did eight parts, and then I had to move to a bigger app and add more parts so it grew from there. I felt it was finished when I heard all the (musical) elements a piece should have.”

And he did all this in about two months, he said.

With the help of Amy Church, Director of Bands at King Arts and Lincoln Elementary, students practiced the piece in preparation for the premiere performance. Howard conducted his masterpiece on April 25 at an assembly for King Arts students and also as part of the school’s Spring Band Concert, which featured two of the four bands at King Arts, the Concert Band and Symphonic Band.

Howard plays clarinet in Symphonic Band, saxophone in Jazz Band, the cello in orchestra, and also plays the flute in small chamber ensembles. He also sings and plays keyboards in the Rock ON’semble, and has played guitar in the guitar ensemble.

“Howard is a very talented and motivated student,” said Church.

“It has been a privilege to see him grow as a musician in the band program these past five years, always striving to learn more instruments, and setting even greater goals for himself,” she added. “We are all proud of him here at King Arts; his accomplishment serves as an inspiration to all of us!”

Howard shared that he definitely wants to pursue music when he’s older and most definitely through high school and college.