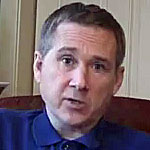 U.S. Sen. Mark Kirk's office released a video today  showing the Illinois senator — three-and-a-half months after he suffered a stroke — walking and talking, and saying he's eager to return to the Senate.

The video comes a week after Kirk was was released from the Rehabilitation Institute of Chicago to the care of his family.

In it Kirk expresses thanks for the patience people have shown him as he works through the arduous recovery process.

He's shown walking on a treadmill and says, "I can't wait to go back to work to vote to spend less and borrow less and tax less and fix our economy.