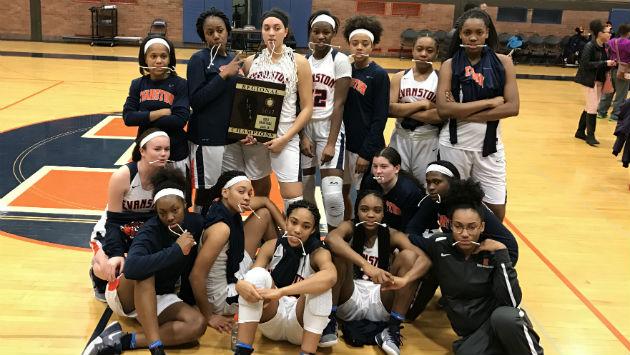 The Evanston girls basketball team sent a message to the rest of the postseason hopefuls left in the Illinois High School Association Class 4A state tournament field Thursday night.

The message? If you can’t stand the heat, get out of the — tournament.

Relentless full-court defensive pressure resulted in another lopsided victory for the streaking Wildkits at the Evanston Regional championship game as the winners forced more turnovers (31) than points allowed (28) and advanced to the sectional semifinals with an easy 67-28 win over Chicago Taft.

Evanston earned its fifth straight regional title, this one coming in the friendly confines of Beardsley Gym, and will play Loyola Academy in the Niles West Sectional semifinals on Monday at 6 p.m. Top-seeded Evanston lost to No. 4 seed Loyola 45-41 back on January 5th, but the Kits haven’t lost since then and improved to 26-3 overall Thursday night.

Evanston pressed Taft into submission right from the start, scoring 23 unanswered points and pitching a shutout in the first quarter. But the hosts never let up when it came to the defensive heat they turned up to a boil and Taft mustered a total of just 7 field goals on the night.

On the offensive end, senior Leighah-Amori Wool left a lasting impression with the home fans by scoring a game-high 25 points and grabbing 11 rebounds, even though she only played three quarters. Classmate Krystal Forrester added 11 points.

Evanston’s pressure defense has added another element for a unit that already ranked among the best in Illinois playing halfcourt man-to-man defense. Unlike some past ETHS teams, you don’t beat the Kits just by beating their press.

But not many opponents have been able to cope with Evanston’s swarming double-teams, at least not lately.

“We played really well tonight and winning my first regional here is just awesome!” exclaimed ETHS head coach Brittanny Johnson. “I’ve been on them lately about getting off to a good start, and the way we started tonight is the way we’ve got to play the rest of the tournament.

“Sometimes when we go into our halfcourt defense we tend to lose our intensity. Pressure is what we’re good at, and in a playoff situation like this you want to be true to your identity. We’ve won this year with our halfcourt defense and with our fullcourt defense, and our balance defensively is different than it was for them last year. And the girls see it.

“Our focus is great, and our intensity is great, but I don’t think we’re playing our best basketball yet. There are still some small things we can do better if we want to be a championship team.”

Wool still had enough energy to dance around her home court and celebrate after she took her turn cutting down the net. The 6-foot senior standout, who will graduate as the leading scorer in program history, connected on 10-of-16 shots from the floor, and until she swished a 3-point shot late in the third quarter, all of her points came in the paint.

“I didn’t know what to expect tonight (from Taft’s defense, which refused to double-team her),” Wool said. “I just knew it was my last game on this Beardsley court so I played hard. It’s senior year and we wanted to go out with a bang.

“We know when we press we’re going to get lots of turnovers and it really gets the pace going in a game. I like that. And even if our press breaks down, we’re still able to communicate, to rotate and have people back on defense. Our press is really effective and it doesn’t fall off when our subs come in, either.”

Evanston shut out the Eagles for the first 10 and a half minutes until sophomore guard Madison Anderson drove and converted a 3-point play in the second quarter. Evanston pushed the lead to 38-11 by halftime and didn’t let up in the third quarter, leading 53-19.