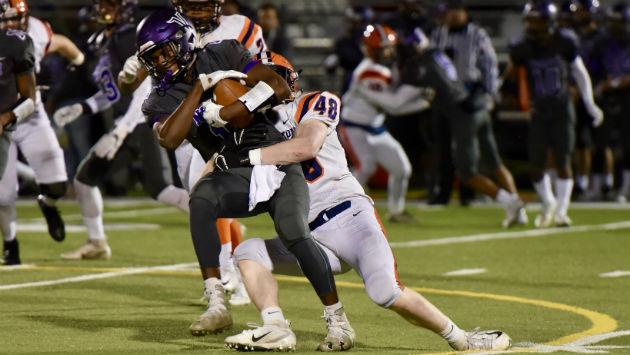 None of the current members of Evanston’s varsity football team were even born the last time the Wildkits won 7 games during the regular season.

So Friday night’s 52-15 thumping of Niles North in Skokie served as more than just the windup of the regular season and a tuneup for postseason play that begins next weekend.

That 7th win marked a breakthrough for Coach Mike Burzawa’s program. Now the fun really begins for the Wildkits, who will find out Saturday night which team they’ll face in the first round of the Illinois High School Association Class 8A state playoffs.

Cion Miller-Smith ran for a career high 152 yards and two touchdowns, and Ben Tarpey threw three touchdown passes as the Wildkits completed a 7-2 season, their best since the 1998 season. It’s the first time since 2003 that Evanston has won as many as 7 games in a season, but that team notched a win in the state playoffs.

That’s the next hurdle left for Evanston to clear.

Cion Miller-Smith (32) of Evanston dashes down the sideline with Niles North’s Myles Davis (15) and Jonathan Ellison-Smith (40) in hot pursuit.

“I’m proud of you, but we’ve still got some work to do,” Burzawa said in the post-game huddle. “Football is the one (high school) sport where you truly earn your way into the state playoffs, that’s one of the beautiful things about high school football.

“We’ve had a lot of years where we’ve gone 6-3, when we’ve been teetering between 5 and 6 wins. We needed to find a way to break through from that, and these seniors did it this year. It’s because of the senior leadership we’ve had this year and our philosophy of “team first.” Everyone has really embraced that philosophy this year.”

On defense, the Wildkits limited the Vikings (2-7) to minus 9 yards rushing. North quarterback Tremaine Conner did connect on 15-of-26 passes for 154 yards and two scores.

With the decision by the ETHS coaching staff to rest leading rusher Quadre Nicholson this week, Miller-Smith stepped out of his backup role and into the spotlight. He contributed touchdown runs of 26 and 4 yards and totaled 152 yards on 12 carries, not bad for a guy who began his high school career as a defensive tackle and has played more snaps on that side of the ball than on offense as a senior.

The 5-foot-6, 170-pounder might be the most physical player on the roster and his punishing runs are guaranteed to get an appreciative reaction from his teammates when he does get the chance to carry the ball.

“Cion is an explosive, powerful running back and he’s just an awesome kid, too,” Burzawa praised. “The other kids really love him and the way he runs through tackles. It’s like we have a thunder and lightning combination between him and Quadre.”

“I’m still a defensive guy, and I’d still choose defense over offense any day,” Miller-Smith explained. “But I had to do what’s best for the team this week. It’s a good feeling, and whenever I get some reps, I try to take advantage of every opportunity I get.

“I was a defensive tackle when I was a freshman and a sophomore and I like to play physical. I guess my teammates like it, too. Ever since I was young I was taught to play hard and play physical, and I guess that just stuck with me.”

Gerrad Lamour (6) of Evanston heads to the end zone for his 3rd touchdown in a 52-15 Evanston romp over Niles North.

Evanston struck for touchdowns on its first two possessions of the game, on a 59-yard bomb from Tarpey to Lamour and on an 8-yard run by Ross in the first quarter. Ross tacked on a 14-yard sprint to paydirt, Miller-Smith ran untouched for a 26-yard score, and Lamour tallied on a short screen pass as the visitors built a 35-7 halftime advantage.

Miller-Smith and Lamour added to their own scoring in the second half, but the highlight for the offense might have come in the final minute when Caleb Hart booted a 42-yard field goal with 38 seconds left on the clock. Hart, a senior, will provide the Wildkits with another reliable weapon in the postseason. He hasn’t missed a PAT kick since winning the job and Friday’s 3-pointer was the first of his career.