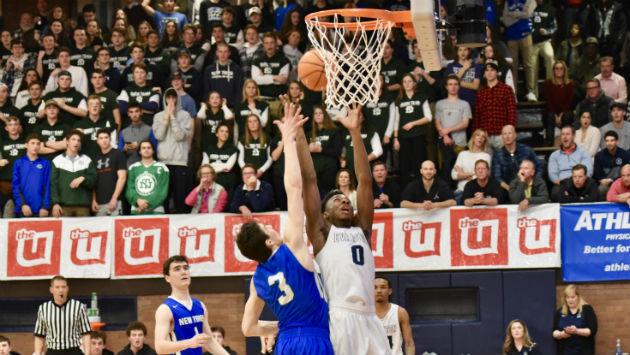 Evanston’s basketball team had an opportunity to clinch the Central Suburban League South division championship and maybe make a statement about the upcoming Class 4A Maine East Sectional tournament all at the same time Friday night.

Instead, the Wildkits came up short in a 56-40 loss to arch-rival New Trier and saw their six-game win string snapped.

New Trier secured at least a tie for the conference crown, although a Trevian loss to Niles North in a makeup game Monday afternoon would enable ETHS to tie for the title, too. The Trevians held Evanston to a season-low 40 points and the hosts could only muster 26 percent shooting from the floor in front of a near-capacity crowd at Beardsley Gym.

The matchup between the top two seeds in the Maine East Sectional grouping really wasn’t about making a statement for the postseason, because there are at least a half dozen teams capable of advancing out of the sectional. ETHS, the No. 1 seed, is assigned to the Glenbrook South regional along with the host team, Chicago Taft, Maine West and Notre Dame.

“All that No. 1 seed means is that it will be an upset if we lose, and that we get to wear white (home uniforms) as long as we keep winning,” said Evanston coach Mike Ellis. “What’s important now is how we play in the postseason.

“New Trier clearly outplayed us in every phase of the game tonight. They came in here and they wanted it more than we did. Our practices (this week) were what set us up for this output tonight. We didn’t prepare to play our best in practice this week.” 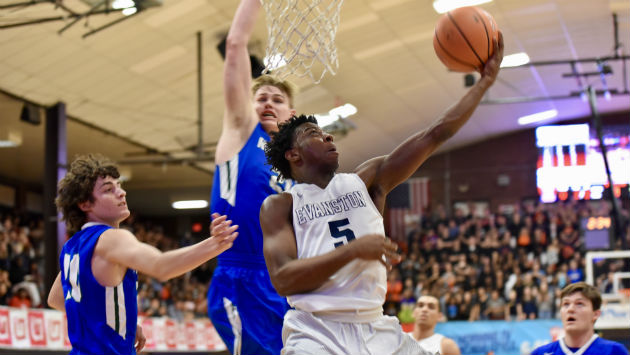 Lance Jones of Evanston tries to beat the New Trier defense with a reverse layup during Friday’s 56-40 loss to the Trevians.

Evanston shot only 30 percent in an overtime win at New Trier the first time the two teams met and had difficulty again solving their 1-3-1 zone defense. Overall, the Kits shot 15-of-57 from the floor and just 5-of-30 from 3-point range.

Lance Jones and Jaheim Holden each tallied 12 points for the Wildkits, and freshman Jaylin Gibson hustled his way to a season high 13 rebounds and 5 points. ETHS slipped to 20-5 on the season, and finished 8-2 in league play after losing to New Trier for the first time since the 2012-13 season.

New Trier’s 6-foot-9 Ciaran Brayboy stashed in 20 points and added 10 rebounds for the Trevs, now 21-3 and 8-1, respectively. Reserve Sam Silverstein scored all 10 of his points in the second quarter to help the visitors maintain a 27-23 halftime edge.

“New Trier’s size was a contributing factor, but we missed a lot of open shots tonight,” Ellis pointed out. “We only shot 30 percent the first time we played them, but we were able to get to the free throw line in that game. Tonight we settled for jump shots and didn’t finish well when we got in the paint. We left a lot of opportunities out on the floor on both ends.

“I won’t say New Trier’s the best defensive team we’ve seen because we played against the best of the best, like Niles North and Loyola. We’ve played 12 of our 25 games this year against teams that have been seeded in the top 5 in their sectionals.”

For the sixth straight year, the home game between the two schools was designated the Bob Bost Classic to honor the former ETHS coach who passed away in 2012.