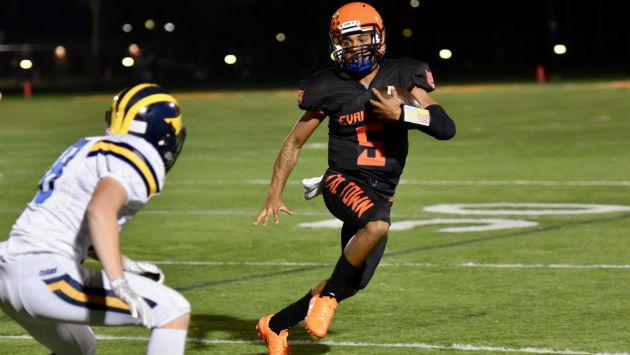 Evanston’s football team had plenty of fun at Glenbrook South’s expense Friday night at Lazier Field. And the special black-and-orange new uniforms the Wildkits wore as part of their Homecoming celebration were just part of the fun.

Malik Ross intercepted a school record 3 passes and also grabbed a pair of touchdown passes, and quarterback Drew Dawkins chalked up 367 yards of total offense as the Wildkits overwhelmed GBS 45-20 and moved one step closer to a berth in the Illinois High School Association Class 8A state playoffs.

Evanston (5-3 overall, 2-2 Central Suburban League South division) joined GBS (5-3, 2-2) as a playoff eligible squad, although both teams will likely need to finish out the regular season with victories to punch a ticket to the postseason. Evanston hosts winless Niles North in the regular season finale next Friday.

Coach Mike Burzawa’s squad scored on all 5 of its possessions in the first half and forced the run-oriented Titans to play catch-up early in the contest. The Kit defense also registered 3 turnovers in the first half, 2 of them coming on picks by the versatile Ross, as the hosts built a 31-6 halftime advantage.

Ross will be the first to admit that he’s a defensive player first — who also plays some offense. Right now, there might not be a better 2-way player in the CSL South. 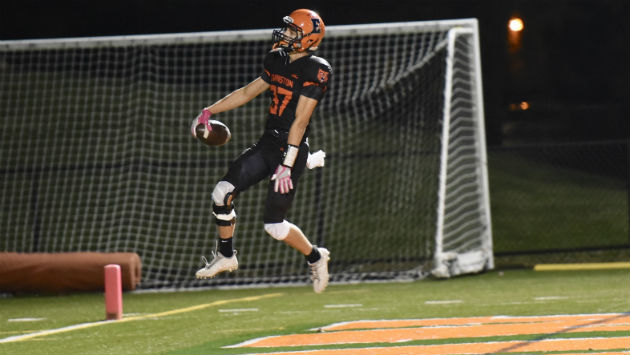 Mike Axelrood of Evanston jumps for joy after a first quarter touchdown pass.

“Last year offense was new to me, and this year the coaches moved me from running back to slot receiver,” pointed out the 5-foot-9,  170-pound junior. “It’s worked out perfectly for me because I’m able to get open and get out in space. I have a lot of plays that are designed for me. And when teams double or triple-team me, that opens up other things in the offense.

“But I’m really out there to make plays on defense first. I was fatigued early in the season when I was still playing running back but it’s helped a lot now that I’m getting less reps there. Tonight, it was really important to get the lead and score quick on GBS. I think that was the best first half we’ve played all season.”

“You saw tonight that we can be a dangerous football team,” said Burzawa. “We executed at a high level — and that’s the truth!

“Malik Ross is such an impact player for us and we expect big things from him every week. He’s so valuable on both sides of the ball. Is he the best 2-way player in the league? There are some good ones out there, but he’s been doing it for us since his sophomore year. We’re excited to have him and he’s such a selfless player.

“Our game plan tonight was that we wanted to get ahead of a strong running team like Glenbrook South, and put them in situations they’re not used to being in.  We got some turnovers and it was just our night tonight.”

The Wildkits struck for a pair of touchdowns in the first quarter, on a 14-yard pass from Dawkins to Mike Axelrood and a 38-yard run by sophomore Quadre Nicholson, and then Ross stepped up to make an impact. 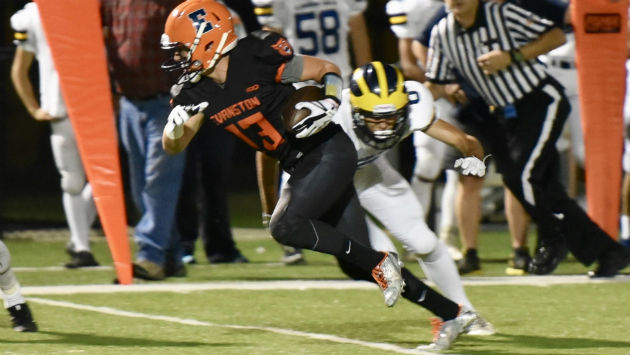 Evanston’s Fletcher Brown (13) looks for the first down marker after grabbing a first quarter pass.

He turned a 20-yard pass from Dawkins into a 55-yard scoring play on the second play of the second quarter, boosting the ETHS lead to 21-6. His first interception in the end zone foiled a potential scoring drive by the Titans, and Evanston responded immediately as Dawkins dashed 80 yards for a TD.

On the next GBS pass by Jeffrey Chones, Ross jumped the out route and set up a 45-yard scoring drive that climaxed with a 32-yard field goal by Charlie Lindland just before halftime.

“Early in the game I got tripped up on that same route, and I knew what was coming,” Ross said. “I knew they’d come back to it and I read it all the way.”
ETHS added another score in the third period when Dawkins found Ross down the middle of the field for a 49-yard TD toss. Dawkins finished off the scoring with 4:08 left in the contest with a 13-yard burst that found the senior quarterback literally running out of his shoe.

On the night, Dawkins rushed for a career-high 179 yards on 17 attempts and completed 9-of-13 passes for 188 yards and three scores. Nicholson added 117 yards on 9 tries as the winners rushed for a season-high 317 yards.

Evanston’s new-look uniforms were a reward for off-season participation by the players, although Burzawa admitted that he fought the desire of his coaching staff to provide the once-a-year uniforms.

“I kept telling the other coaches that this is not a fashion show, but we finally did it for fun, and it’s a great memory for all of the kids because they get to keep the uniforms,” said the ETHS head coach. “After we came up with the theme for the season — Earn It — I decided that they had earned it with 80 percent attendance for the off-season workouts. We just wanted to make a good memory tonight.”