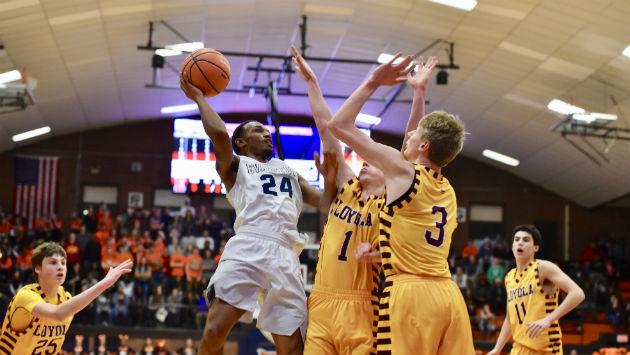 At least a half dozen teams scheduled to compete in the Class 4A Maine East Sectional basketball tournament in another couple of weeks can be considered legitimate  threats to win the tourney if they put together a hot streak.

But only one of those teams will be seeded No. 1 when participating coaches turn in their votes next week. And Evanston staked its claim to the top spot by adding a 43-40 victory over Loyola Academy to the Wildkit resume Tuesday night at Beardsley Gymnasium.

Two key steals by Ryan Bost early in the fourth quarter triggered an 8-0 run for the Wildkits, and Jaheim Holden applied the finishing touch with four bonus free throws in the last 25 seconds to take down the defense-minded Ramblers.

Evanston, now 19-4 overall, owns a pair of wins over  Maine South, single wins over New Trier and Loyola, and has split a pair of decisions against Niles North. Loyola fell to 21-4 on the season after leading the hosts until the final 7 minutes of Tuesday’s non-conference matchup.

Figure in the toughness of the Wildkit overall schedule and the choice for No. 1 seems obvious.

Evanston coach Mike Ellis, however, is more concerned about where ETHS will be sent to play in a Class 4A regional than how the seeds shake out. Glenbrook South, Maine South, Niles North and New Trier will all host regionals and the last three teams could all be seeded in the top 4 in the sectional complex. 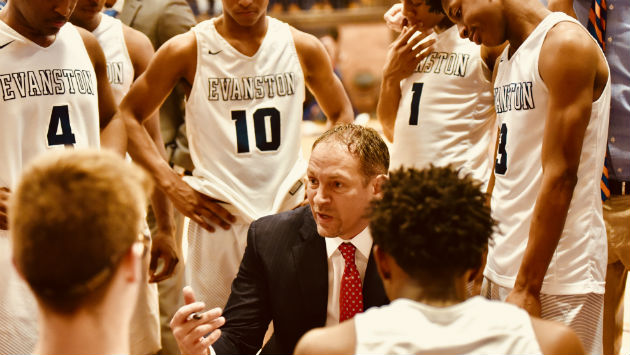 “The No. 1 seed isn’t important. It doesn’t matter if we’re the No. 1, No. 2, No. 3 or No. 4 seed,” Ellis said. “All I know is that we’ll be at one of those four sites trying to win a regional. Everything else is out of my control. It will come down to who’s playing the best in March, just like it always does.

“Winning a game like this one tonight shows that we have the experience you have to have down the stretch to be a solid team. We’re comfortable in games like this that our guys will make the right decisions and get stops on defense when we need them. Tonight we were fortunate to get some stops in the second half when we needed them the most.”

Loyola, with a deliberate style of play that limits opponents’ possessions, hasn’t surrendered 50 points in any game this season. The Ramblers held the hosts to 9-of-35 field goal shooting over the first three quarters and held a slim 28-27 lead entering the fourth quarter.

That’s when the Wildkits beat the visitors at their own game — man-to-man defense. Twice Bost swiped the ball away from Loyola guard Kevin Cunningham, fueling an 8-0 run that featured a 3-point basket by Blake Peters, his only bucket of the game, plus a free throw and a jumper from Lance Jones and a layup by Bost.

Bost is at his best when sizing up an opposing ballhandler and then pouncing to knock the ball away. He was credited with 4 steals overall as the Kits totaled 13 for the game.

“Ryan played smart and was selective (when to make his move), because you can either (A) reach in and commit a foul, or (B) take a bad angle where the dribbler can go right by you,” Ellis explained. “Those were some productive plays that he made, and he helped us generate some offense.

“In the first half we didn’t feel right playing the way we played. Give them all the credit in the world for the way they turned it around in the second half. Our guys played with poise and they didn’t panic. When you get down two or three baskets against a team that plays like Loyola, it feels like you’re down double digits. So that’s why when we did seize the lead, we wanted to slow things down and lock in more. Sometimes you can hurry so much to get the lead and it’s important to take a breath and exhale when that happens.

“Of course, there’s a risk when you slow down and play their style of play. You have to have the right mindset that you’ll be able to close games out.”

A Bost miss at the free throw line and a 3-point basket by Loyola’s Connor Barrett (14 points) pulled the Ramblers back into a one-possession game, trailing 39-38 with 34 seconds left on the clock. But Holden (game-high 15 points) sank 4 straight free throws, and a last-second 3-point attempt by Cunningham was long for the losers.

Jones finished with 12 points and Bost added 7 to go with his 4 steals. The Wildkit regulars didn’t play as many minutes as usual because Ellis followed the Senior Night tradition by starting upperclassmen Matt Hall, Reggie Henley, Semaje Jefferson, Harry Porter and Jaylen Winfield. The 6-foot-5 Winfield, who has earned more playing time in the last two weeks, sank a 3-point basket and grabbed a team-best 6 rebounds for the winners.