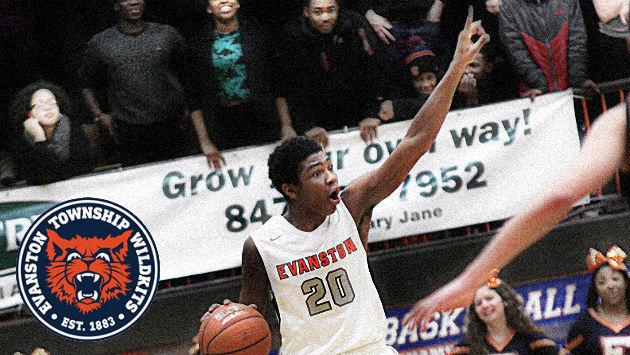 Evanston’s basketball team isn’t perfect yet. The Wildkits sometimes turn the ball over too much in their halfcourt offense, and head coach Mike Ellis probably won’t be 100 percent satisfied with the defense until they actually shut out an opponent.

But the veteran coach knows how to build a state championship contender, and the fact that the Wildkits completed a perfect month of January on Saturday at the War on the Shore at Loyola Academy means they’ve taken the step forward they needed to take as a team.

With 15 players reaching the scoring column, Evanston blitzed St. Ignatius 68-32 for its’ 19th win in 21 games. Saturday’s triumph was the 11th in a row for the Wildkits, who won all 9 games in the month of January.

What does that tell Ellis? That the best may be yet to come.

“We definitely got a lot better as a team coming out of the holiday break down in Kentucky,” Ellis said following Saturday’s shootout win. “I think we’ve gotten better every week.  Down in Kentucky we learned what it takes to win, and what we can’t do or we’ll lose. We took the lessons we learned down there and we’ve applied them on the court all of this month.

“I think we’ve come together as a team. One of my philosophies is how you’ll play in March is determined by how you practice (and play) in January. These guys all have good practice habits and they come in every day wanting to get better.

“You’ve got to improve in January. You can’t be the same team on February 1 that you were on January 1, and we put a lot of value on how well we play in January. The long, dog days of January are where you gain growth and develop as a team. If you look at my career (coaching) record, I think you’ll see that it’s better in January than in any other month.”

St. Ignatius (8-8), coming off an emotional 3-point win over Loyola in the same gym on Friday night, was no match for the Kits after the first quarter. ETHS outscored the Wolfpack 19-5 in the second period to grab a 32-14 halftime lead as junior Nojel Eastern stashed in all 9 of his points.

Senior Charlie Maxwell led the winners with 11 points and Jerome Bynum added 10. Dylan Mulvihill (8 points, 11 rebounds) provided a pair of dunks for the season highlight film in the second half — both of them one-handed throwdowns —  before the benches took over for both clubs.

The three freshmen starters for Evanston’s unbeaten sophomore team all saw action in the final 3 minutes and scored varsity points. Jaheim Holden contributed 4 points, 2 assists and a steal; Ryan Bost made his only field goal attempt and claimed 2 rebounds; and Lance Jones was credited with 2 points and 3 steals.