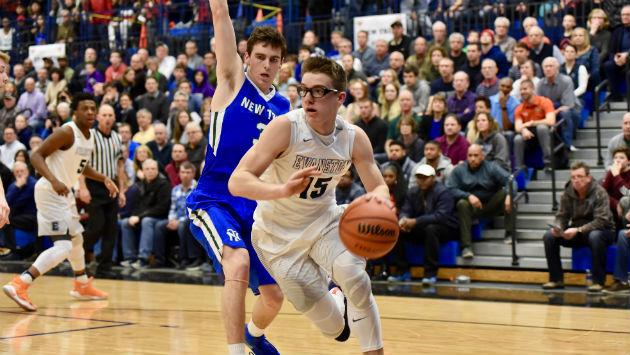 This one was for the skeptics. The basketball team afforded the least amount of respect for a No. 1 seed in Class 4A — Evanston — ruled the state’s toughest sectional tournament with a convincing 69-57 victory over arch-rival New Trier in front of a standing-room-only crowd of more than 3,000 Friday night at Maine East.

The Wildkits punched a return ticket to the Elite Eight and advanced to the supersectional set for next Tuesday at 7 p.m. at the Sears Centre in Hoffman Estates. Now 25-5 overall, Coach Mike Ellis’ squad will be matched up against Lake Zurich, a 69-60 winner over Barrington.

Winner of that game will move on to the Illinois High School Association Class 4A state finals set for next Friday and Saturday in Peoria.

Evanston hit the Trevians with a barrage of 3-point baskets in the first quarter, then owned the fourth quarter and outscored the losers 22-19. A balanced scoring effort led by freshman Blake Peters (19 points) and juniors Lance Jones (17 points, 5 steals) and Jaheim Holden (16 points, 5 assists) kept Evanston’s season alive while New Trier, which split two regular season showdowns with the Wildkits, bowed out with a 25-6 record.

The Trevians and Wildkits were pitted against each other in a sectional championship game for only the third time in the long postseason history of the two programs. Friday, New Trier was paced by 6-foot-9 Ciaran Brayboy (14 points) and guard Andrew Kirkpatrick (12). 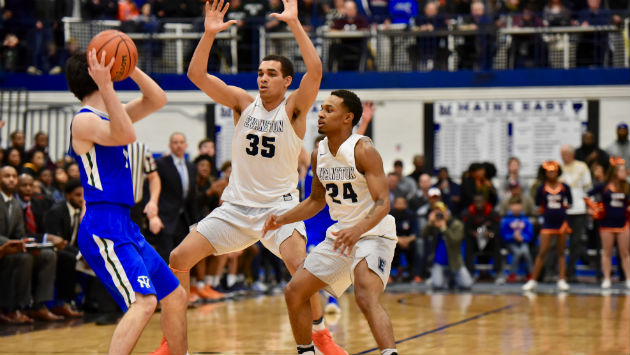 Ellis spent the week leading up to the game reminding his players that no one had picked them to earn their second straight sectional crown, no matter what the seeds said.

Then again, this is the same team that was picked fourth in the Central Suburban League South division standings in the preseason and wound up sharing the championship.

“We felt all season that we had something to prove,” Ellis said. “They’re playing smart basketball, they’re playing unselfish basketball and that’s how you have to play at this time of year. Now we want to capitalize on this even more. Nobody picked us to win this sectional. To come out of here and still be playing is a credit to our kids and how bad they want to win. They were really ready to take on this challenge.

“Our guys, especially our guards, are doing a great job of following the game plan and they’re really focused on how we want them to attack teams. And the way they play in the fourth quarter really speaks to their will to win. Tonight when it got close they seized the momentum, stopped the (New Trier) tide and rolled it back the other way. That’s a testament to their will to win.”

“I feel like a lot of people doubted us, but that just made us come together as a family and create an even stronger bond,” said Jones, who sank four 3-point baskets on his way to a 15-point splurge in the first half. “It feels really good, because a lot of people didn’t think we’d make it this far. They counted us out and that’s what makes this feel really amazing. 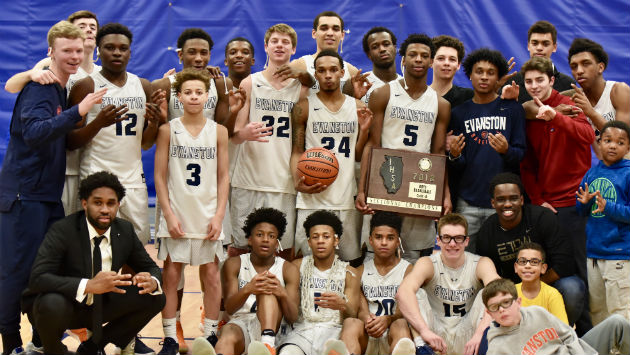 Sectional champs for the second straight year, Evanston punched its ticket to the Elite Eight in Class 4A with a 69-57 triumph over New Trier Friday in the championship game.

“And yes, it’s sweeter because we did it against our rivals. They got us last time — but we got them when it really counted. I never counted us out. We knew after last year what it takes to get here, and the steps that we had to take.

Peters, mired in a shooting slump for the past half dozen games, tossed in three straight 3-pointers in the first quarter as the Kits finally solved a New Trier 1-3-1 zone defense that limited them to their two worst shooting nights of the regular season previously.

Evanston broke out to a 20-11 first quarter lead and the Trevians never got closer than 5 points the rest of the way.

“The whole team really came to play tonight, and it’s a great feeling,” said Peters. “Every time we went into the huddle in the fourth quarter we said ‘Saturday’ because we wanted to come back and practice on Saturday (with the season still alive).

“I have to admit that I played horrible in both games against New Trier and I felt like I let my teammates down with both performances. But once I started hitting some shots tonight, we were able to feed off that barrage.

“We definitely heard the noise from everyone who said we weren’t going to win this sectional. That just drove us to play even better. This is just another step on our goal of getting to Peoria.”

New Trier, which rallied from a 22-point deficit to defeat Niles North in overtime in the sectional semifinal, challenged twice in the second half but Evanston’s poise was too much for the Trevians to overcome. Even without a senior on the floor, the Wildkits don’t fold under pressure.

The Trevians closed to within 39-33 midway through the third quarter and that just meant it was time for Holden to step up for the winners. Held to just one field goal over the first 20 minutes, Holden twice challenged the 6-9 Brayboy and converted both times.

The first time he drove the baseline for a layup, and the next time down the floor dashed down the middle and went under and up with a circus shot that brought those who weren’t standing in the SRO crowd to their collective feet. The all-conference junior guard later added a pair of free throws that stretched Evanston’s advantage to 47-38 entering the final quarter.

Twice New Trier pulled to within 5 points in the fourth period, the last time at 53-47 on a free throw by Kirkpatrick with 2 minutes, 48 second remaining. Evanston answered with patient play and a 7-0 scoring run, clinching a return trip to the Elite Eight.