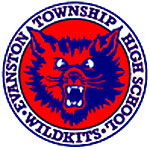 In a regional championship game at Maine West on Friday, the #10 seed Evanston Wildkits defeated #5 seed St. Ignatius behind a stellar pitching performance by Allie Managlia and dominating hitting from Anna Balch.

Lynch had a no hitter going until the fourth inning, but it was broken up with a Balch double.  The Wildkits were unable to score her.

The game remained scoreless until the 4th inning when St. Ignatius scored on a triple from Hoffman, and singles from Lenti and Casini. Balch made an amazing diving play on a line drive to keep them from scoring more.

The Kits got on the board in the top of the 6th inning.  Freshman Maddy Managlia started the inning with a double to left field.  Caroline Duke tripled to the right field fence to score her, and Balch singled Duke in.

In the bottom of the sixth, St. Ignatius got runners to second and third on a double by lynch and a single from Casini.  However, a great play by centerfielder Allie Nortz took away the scoring opportunity.

Both teams went down three up three down in the 7th and the game was sent into extra innings.  In the Ignatius half of the inning, Allie Managlia made three great plays on balls hit up the middle to take away three hits.

The Kits were scoreless in the 8th despite a single by A. Managlia.  Ignatius was scoreless despite Lenti reaching on error.

The Kits broke the game open in the top of the 9th.  With the bottom of their lineup coming up, the Kits showed what they were made of.  Emma Maxwell started the inning with a hard hit up the middle.  Emily Mathyer and Maddie Reiches then had back to back bunt singles to load the bases.

Ignatius did not go down without a fight.  Vielma reached first to start the inning.  Nortz made another great play on a deep fly balk untie Gao for the first out.  Lorenz reached safely, Russell singled, and Gallagher doubled to pull Ignatius within one run.

After an intentional walk to cleanup hitter Hoffman, Lynch hit a shot to right field that looked like the game winner.  Right fielder Jessica Garcia ran back, caught the ball over her shoulder and rifled the ball to home on a fly.  Ignatius was unable to score.  A Managlia strikeout ended the game.

The Kits take on Maine West in the regional championship game at Maine West at 11 a.m. today.