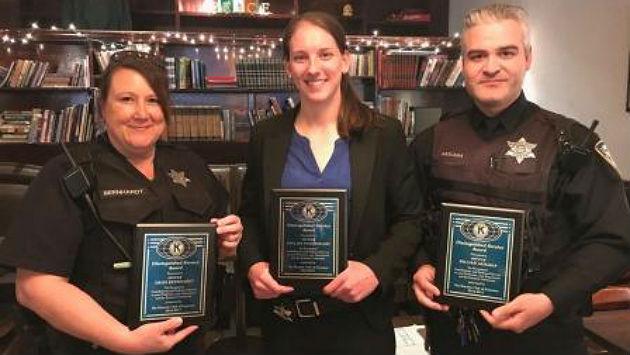 Three officers from the Evanston Police Department received distinguished service awards this noon from the Kiwanis Club of Evanston.

The awards recognized Officer Heidi Bernhardt, Officer Paulina Pogorzelski and Officer William Arzuaga for their “exceptional contributions and dedicated service to your profession, your department and the Evanston community.”

Arzuaga observed the victim bleeding heavily and quickly applied a tourniquet to the victim’s leg to stop the bleeding. The victim was transported to the hospital where it was discovered the bullet severed an artery that required extensive surgery to repair.

The surgeons that repaired the artery, credited the quick thinking and proper application of the tourniquet by Arzuaga for keeping the victim alive and stabilized until he could be operated on at the hospital.

Bernhardt and Pogorzelski were recognized for their actions on Oct. 22, 2016. About 9:45 a.m. an Evanston police officer was at the intersection of Dodge Avenue and Emerson Street putting down the stop signs due to the traffic signals being out, when she was struck by a dump truck that was traveling eastbound on Emerson Street.

Bernhardt and Pogorzelski were driving by at the time of the incident and observed what occurred. They were able to stop the driver of the truck from driving over the officer further and also summoned the paramedics.

Because the truck stopped directly on the officer’s leg, they assisted the truck driver in backing up in order to free up the officer and also tended to the officer until the arrival of the paramedics.

The injured officer was transported to the hospital for treatment and is still working hard at recovering from her injuries.