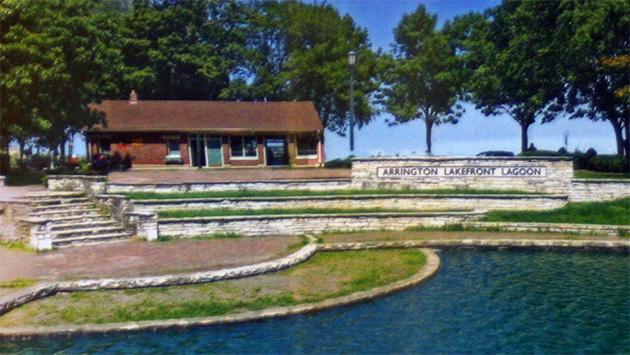 Plans for a new sign at Evanston's lakefront lagoon to honor the family who's donated $500,000 to renovate it came in for sharp criticism at Tuesday's Preservation Commission meeting.

Commission member Jack Weiss called the sign, shown in a rendering above, to be "inappropriate to the site, rising up beyond the horizon line and destroying the horizontal look of that end of the lagoon."

Despite the complaints from Weiss, the commission voted 5-2 to recommend approval of the sign as not being "incongrous to the historic character" of the site. 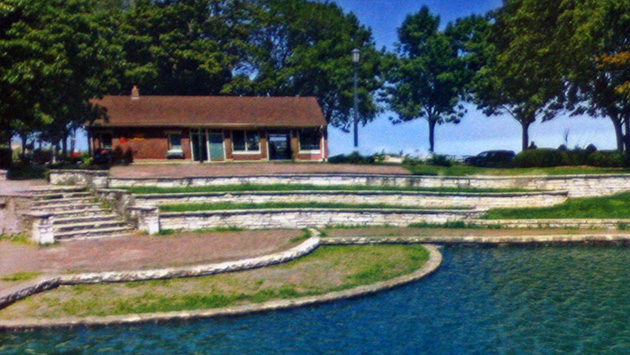 The proposed sign (top) superimposed on an image (above) of what the same area looks like today.

The vote came after the city's assistant superintendent of parks, Stephanie Levine, said that the placement of the sign was the result of a lengthy negotiation with Michael Arrington, representing the family foundation that's donating the money in honor of his father, the late W. Russell Arrington, who long represented Evanston in the Illinois House and Senate.

Michael Arrington, Levine said, wanted the sign to be visible from Sheridan Road.

But Weiss complained that even most commercial signs in the city wouldn't be visible from that distance.

The sign would be located about 200 feet from the roadway.

Landscape architect Ryan Kettelkamp, hired by the city for the project, said the lagoon steps (at left in the photos above) were built as a Works Progress Administration project in the 1930s, but that the limestone retaining wall, where the sign would be placed, was added in the 1980s.

The $500,000 donation from the Arrington Foundation, combined with a $400,000 state grant means the city will spendonly about $100,000 of its money on the project, which was announced nearly two years ago.

City officials hope to begin work on the project this summer, assuming the City Council approves the signage.