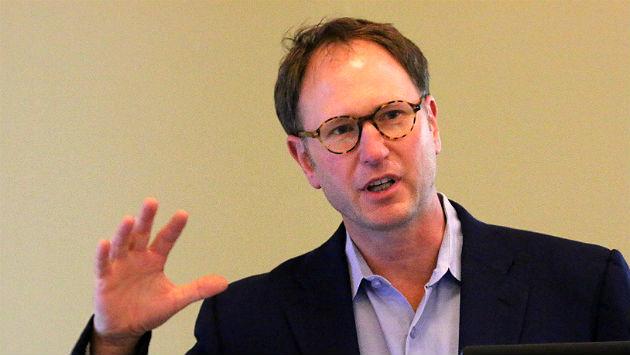 Lake Michigan water levels are at a record high and the coastline is getting pinched from above and below, Great Lakes consultant Cam Davis told Evanston residents at the Ecology Center Wednesday night.

He said climate change appears to be causing the more intense storms and also leading to periods of extremely cold winter weather that reduce evaporation from the lake. But on the other hand, hotter summer weather can increase evaporation.

Lake levels have always fluctuated, Davis added, and that’s a very healthy thing. “You see plants and animals come back at different levels,” he said.

A full house for the meeting.

Evanston Parks Director Lawrence Hemingway said the rising lake levels have forced closure of the city’s dog beach and have dramatically reduced the sandy area at other beaches.

He said the city is one of four North Shore communities that are part of a state sand management working group that has been approved for a grant from the U.S. Army Corps of Engineers that, possibly as soon as next year, will see sand dredged from the approach to Waukegan Harbor shipped by barge to rebuild the beaches.

Hemingway said the Greenwood and Lee street beaches are the leading candidates in Evanston for the extra sand and that if enough sand is available the city may try to restore the dog beach as well.

Alex Hoxsie of the Corps of Engineers Chicago office said the sand would be pumped from barges to the shore as a liquid slurry and that it may initially appear slightly darker than the existing sand and have a “wet odor.”

But those issues will clear up, he said, as the sand is spread on the beach by earthmoving equipment.

The project will also involve planting dune grasses and other vegetation to help hold the sand in place.

Hoxsie said the sand to be dredged from the approach channel and outer harbor at Waukegan has been tested and shown to have no detectable level of PCBs or asbestos — contaminants that were an issue in Waukegan’s inner harbor before a cleanup that was completed a few years ago.

An aerial view of Waukegan harbor from the Corps website.

A public review process for the sand project is underway through July 31, and Hoxsie said questions or comments can be emailed to John.t.Belcik@usace.army.mil. or sent to U.S. Army Corps of Engineers, 231 South LaSalle St., Suite 1500, Chicago, IL 60604.

More information about the project is available on the Corps of Engineers website.