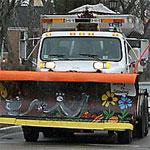 The National Weather Service says we can expect snow showers this afternoon followed by lake effect snow overnight that could be heavy at times.

Evanston Assistant Public Works Director James Maiworm says the city could get two to four inches of snow by morning, depending on how severe the lake effect is.

He says public works crews are standing by in preparation for the overnight storm and a small crew is currently anti-icing main and secondary streets citywide.

Maiworm says at this point he doesn't expect to need to impose any parking restrictions as a result of this storm.