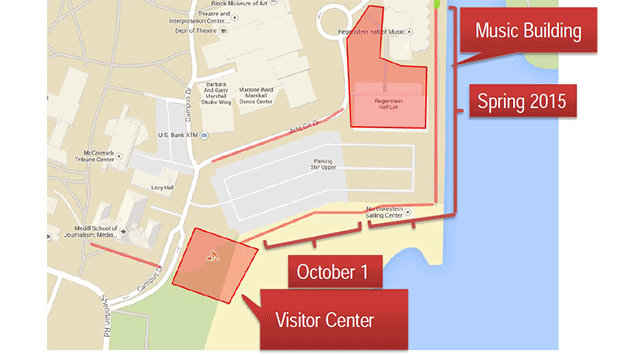 A portion of the lakefront path through Northwestern University's Evanston campus that's been closed for construction will reopen next month.

Evanston aldermen were told Monday night that the section from the new visitor center to the sailing center will open Oct. 1, while the part that runs past the new music school building will open next spring.

Deputy City Manager Erica Storlie said construction on the new Kellogg School of Management building further north on the campus will soon require closure of some walking paths in the interior of the campus — but not the lakefront path.

Alderman Jane Grover, 7th Ward, said the portion of the path by the music school, when it reopens "will be areally nice segment."

It will be wider that it was before, Grover said, and the metal sheeting of the waterfront retaining wall will be covered with a concrete cap. "It will be quite nice and usable," Grover said, "and will have new landscaping."