Evanston residents get a second chance tonight to say which scenarios they prefer for redeveloping the city’s lakefront.

Some of the 80 people who attended Wednesday’s session gather around one of the consultants to ask questions about the lakefront plans.

City consultants unveiled three alternative master plan proposals at a meeting Wednesday and pledged to rework the plans to narrow them to two alternatives for tonight’s session at 7 p.m. in the Parasol Room at the Civic Center. 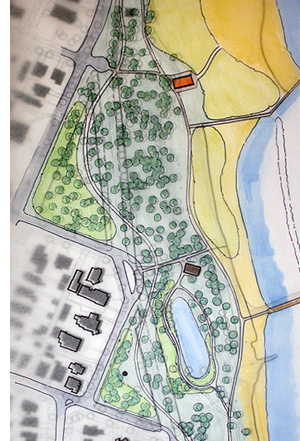 Among options presented Wednesday was a proposal to close Sheridan Road from Davis to Clark streets, rerouting through traffic onto Forest Place, Church Street and Judson Avenue.

That would reclaim the roadway for park land and incorporate two parks now isolated by the roadway into the lakefront. They are Cornelia Lunt Park on the triangle formed by Church, Judson and Sheridan, and Patriots Park, in the triangle bounded by Sheridan, Forest Place and Davis Street.

The plan would also permit redesigning what are considered dangerous intersections of Sheridan Road with Church and Clark. 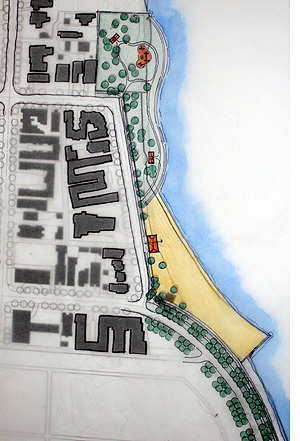 The consultants also suggest narrowing Sheridan Road from four to two lanes as it passes along Calvary Cemetery at the south entrance to Evanston.

lanes north and south of the cemetery and said the current configuration just encourages motorists to exceed the speed limit.

A narrower street, he said, would make room for wider and safer pedestrian and bike paths and better landscaping in the area.

They suggest that usage of the city’s ramp for motorized boats is so low that the city should consider closing it and using the breakwater around the ramp as a fishing pier.

By contrast they call for expansion of the city’s heavily-used facilities for carry-in boats — kayaks and small sailboats.

The plans also calls for rebuilding restroom facilities at the lakefront to make them handicap accessible and providing handicap access to the beaches, two changes required by federal law.

The consultants also suggest a variety of possible alternatives for improving views of the lake by reducing the prominence of the stone barriers along much of the lakefront, but note that the alternatives carry widely varying price tags.

The only part of the plan that is currently funded are proposals to rebuild and widen pedestrian and bicycle paths along the lakefront. That plan, Parks and Recreation Director Doug Gaynor noted, has received a $500,000 state grant.

Following tonight’s meeting the consultants will prepare a draft "preferred design" for the lakefront which is to be presented at a 7 p.m. meeting on Thursday, Oct. 4.