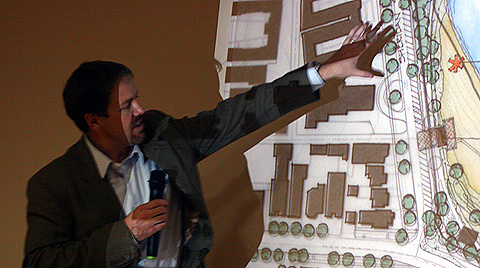 Concerned about low turnout among those who don’t live close to the lakefront, Mark Metz, of the city’s Playground and Recreation Board, announced at what was to have been the final public workshop on the plan that the city plans to hold three additional meetings seeking public comment in different neighborhoods around town.

Among the ideas that have so far survived the winnowing process are: 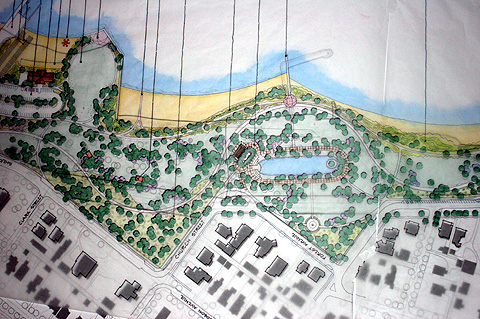 The latest version of the plan appeared to have substantial support among many of the roughly 80 people attending the session in the Civic Center’s Parasol Room, but it also drew some sharp criticism, notably from some power boat owners dismayed that the plan suggests eliminating the city’s only boat ramp for their use.

City consultant Greg Weykamp of EDAW, Inc., said said the existing ramp south of Church Street is in poor condition and would need to be rebuilt to remain in use.

Mr. Weykamp said coastal engineers have told the consulting team that there aren’t any good sites for a power boat ramp in Evanston, because water levels near the shoreline are too shallow.

But he said the best of a poor set of choices would be to build a new ramp at the north end of the Clark Street beach.

The draft plan shows a small ramp there, designed only for use by city emergency crews, but he said it could be expanded to handle more boats if the city chose to do so.

No schedule for the additional public meetings was announced. Once those are completed the plan will be subject to review by the Playground and Recreation Board, the City Council’s Human Services Committee and the full City Council.

The plan is designed to guide city development efforts along the lakefront for a decade or more. Except for a grant to fund expanded bike paths, no funding sources for implementing the projects have been identified yet.