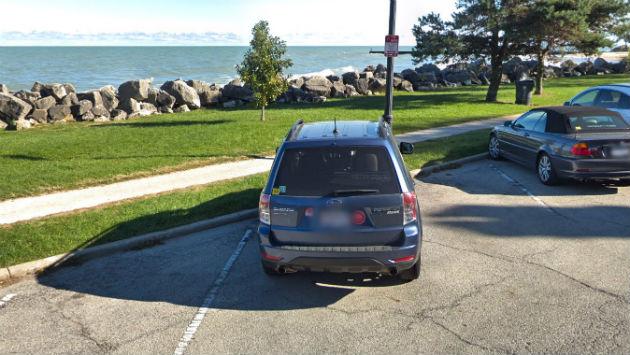 Residents of Sheridan Square still have exclusive access to a section of lakefront parking nearly two years after a City Council committee voted unanimously to deny them that privilege.

The denial vote came at an Administration and Public Works Committee meeting on Oct. 23, 2017. It was meant to end a test of the parking restriction plan that first had been adopted in 2015 after some Sheridan Square residents complained about alleged drug dealing and sexual activity among people parking along that stretch of the lakefront.

The number of spaces restricted to residents was then scaled back in 2016 from 44 to 22 for another test after complaints from beachgoers and observations by city staff that many of the restricted spaces remained unoccupied during the beach-going summer days.

At Wednesday’s Transportation and Parking Committee meeting, Interim Parking Manager Michael Rivera raised the issue that signs on the street had never been changed to reflect the 2017 vote.

And Daniel Stein, a former member of the city’s Parks and Recreation Board who lives in northwest Evanston, complained that the parking preference for immediate neighbors was especially inappropriate when the city is spending $500,000 this year to renovate Garden Park adjacent to the parking area.

“I think this is an equity and access issue,” Stein said. “If we’re going to put money into the parks, we need to have accessible parking at the parks for all.”

Committee member Alex Anon said he had opposed the restrictions initially and still felt they were unwise. “I’ve been in that area at night,” Anon said, “and I haven’t seen the problems residents complained of.”

Alderman Cicely Fleming, 9th Ward, said the South Boulevard Beach at Sheridan Square is the one many people can get to most easily from her ward. She suggested opening the daytime parking to any Evanston resident.

But Alderman Melissa Wynne, whose 3rd Ward includes Sheridan Square and who had pushed for the previous restrictions, said changing the signs so what was posted matched what’s in the city code “would be a huge surprise to the community.”

She insisted that a community meeting be held before the staff considered making signs on the street match the law on the books.

And, given vacation schedule conflicts for committee members over the summer, it appeared at meeting’s end that the Sheridan Square parking issue won’t be discussed again by the Transportation and Parking Committee until its Sept. 25 meeting, giving Sheridan Square residents another full summer of exclusive access to the parking spaces.