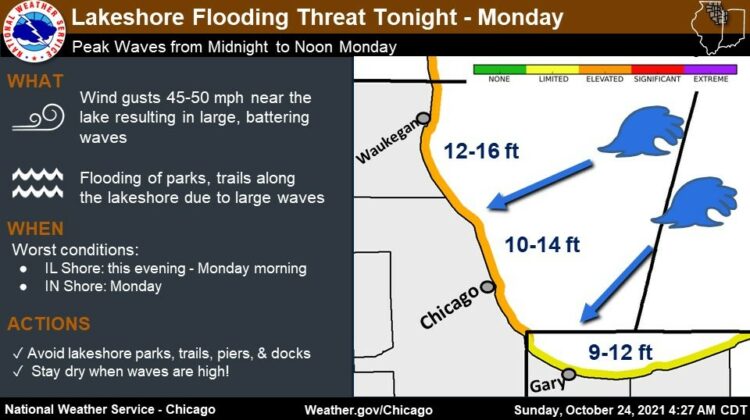 The weather service says we can expect flooding of trails, parks and low-lying areas along the Lake Michigan shore from large waves from 7 p.m. Sunday through 7 p.m. Monday. Peak winds of 50 miles per hour and wave heights of 10 to 14 feet are expected.

The flash flood watch, for steady rain from Sunday afternoon through Monday morning, is expected to lead to ponding of water on roadways and in low-lying areas, although the greatest risk of that may be considerably to the west of Evanston.

And the wind advisory indicates we can expect blustery east winds gusting between 45 to 50 miles per hour that are likely to knock down tree limbs from midnight Sunday night until 7 p.m. Monday.

The City of Evanston has issued an alert asking residents to postpone-non-time-critical water usage until after 1 p.m. Monday to reduce the risk of basement and street flooding.