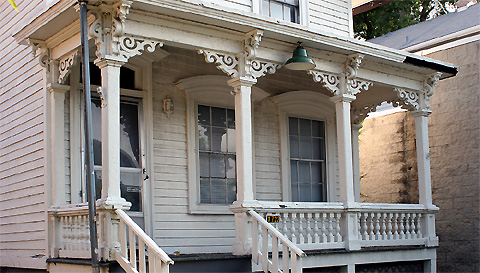 Lankmarks Illinois would like to save this house on Central Street.

The group claims the city “has turned its back on its own preservation ordinance.”

It cites, among other incidents, the City Council’s recent decision to approve demolition of buildings on the former Kendall College campus and the pending request to demolish a historic home at 1722 Central St.

The group doesn’t mention that the decision to replace the Kendall College buildings with single family homes was reached as part of an agreement between the property developer and neighbors about how the site should be redeveloped.

Nor does it mention that the developer of the 1700-1722 Central St. site initially proposed to restore the historic building, but dropped that plan in an effort to respond to neighbors’ objections about other aspects of the project design and after neighbors indicated no special interest in preserving the house.

Tuesday night the Preservation Commission rejected the developer’s request for approval to demolish the home on Central Street, next to the Evanston Theater complex.

The redevelopment proposal will have its next public hearing before the Plan Commission on Nov. 8.