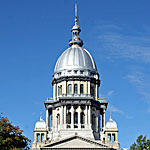 House Republican Leader Tom Cross said pension reform will not be addressed before the end of the Legislature’s spring session. He said he wants a special session sometime this summer to address the issue.

“As we worked on it throughout the day … it became clear that there were problems with that bill. A number of folks on the other side of the aisle … were not going to support it after a change this morning and the governor’s office asked us to not call the bill,” Cross said late this evening.

Gov. Pat Quinn, in a statement, said the state is "very close" to a solution that would stabilize the pension system, "but we are not there yet."

Quinn said he would meet with legislative leaders next week to try to reach a pension reform agreement and bring the legislature back into session to vote on it.

The Cross plan emerged House Speaker Michael Madigan, D-Chicago, transferred control of the legislation to Cross after a spat between Republicans and Democrats over the state's budget.

Republicans refused Wednesday to cooperate on the state's budget because of the so-called proposed "cost shift" of pension responsibilities for teachers and college employees from the state to local employers.

Cross and other Republicans equated the shift of costs, which would have taken place over at least six years, to a property tax increase, classroom spending cuts or some combination of both.

Cross said his plan would have given local employers some responsibility for pensions by making school districts and colleges responsible for covering end-of-career pay raises.

Currently, the state covers end-of-career raises of up to 6 percent that count toward pensions. Anything above 6 percent the school districts and colleges must cover.

Cross' plan would have knocked that down to zero, starting with any new collective bargaining agreement.

"Is that going to be an increase cost to the school districts?" Nekritz asked.

"Is that going to be a property tax increase?" Nekritz asked.

"And why would that not be a property tax increase?" Nekritz asked.

Cross skirted the question, saying schools must factor pay increases into their budget, just like any other costs.

Cross didn't have an estimate for the amount the state would save by not paying for end-of-career raises.

Teachers unions and other groups that represent schools came down hard on Cross' plan, saying they liked it even less than the previous proposal.

"It takes away the rights of our members to ever receive any kind of salary raises, because the districts are strapped and will not want to provide extra over zero percent," Cinda Klickna, president of the teachers' union, the Illinois Education Association.

"From a predictable, controllable standpoint, this is a tough issue for school districts to manage, we just simply can't even come close to managing it," Clark said.

Jerry Stermer, Gov. Pat Quinn's budget director, testified this morning in favor of Cross' plan, saying it would save the state between $66 billion and $89 million over 30 years and eliminate the $83 billion unfunded pension liability.

The committee approved Cross' plan, which was awaiting a vote on the House floor before the deal fell apart late inthe day..