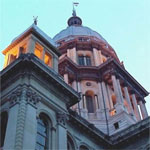 The state legislature is considering killing off a program that lawmakers have used to provide college scholarships for children of campaign supporters.

SPRINGFIELD — Give state Rep. Fred Crespo an "A" for effort.

Crespo, D-Hoffman Estates, has authored a bill to kill a college scholarship program that legislators have used to reward friends and supporters. Now that bill must be approved by the very legislative body that critics, including Crespo, say benefits from its ongoing misuse.

Lawmakers cannot give the waivers to family members, but nothing stops them from giving them to the children of political backers and or those living outside their district.

A recent investigation done by the Better Government Association shows that since 1999, state Rep. Monique Davis gave at least 10 tuition waivers to residents living outside of her district. The association advocates for transparency and accountability in government.

Under the Illinois School Code, those participating in the scholarship program must nominate at least two people of school age annually to receive the scholarship, as long as they live in the legislator's district.

"These families were insulted," she said Friday, "They asked me, 'Do you want me to tell people I was separated for two years and sent my kids to live elsewhere?'"

Davis said she hopes BGA and others wanting to abolish the program will stop trying to halt the education of hard-working students.

And, she pointed out that Illinois has "two governors in jail at the same time for corruption, but we aren't doing away with the governor's seat."

But Crespo said abuse of the program is embarrassing.

"I was born in this state, and I'm proud of this state. But it makes me sick to see my colleagues misuse this program," Crespo said.

A similar bill to end the program passed the House in March 2010, before being crushed in the state Senate.

"It seems like every three weeks, we hear something about some of the legislators abusing the program, and I think the other representatives are concerned about that," Crespo said.

In the past two years, several state representatives from both political parties have switched from opposing reform to supporting the move. Those switching their votes include:

"I hoped that there would be a brighter financial future for the state, but that doesn't appear to be the case. Financially we need to start making these types of decisions," said Brady on why he chose to switch his vote.

Illinois universities must foot the bill for the tuition waivers. Crespo said it costs universities around $13.5 million annually to admit the scholarship recipients. The state owes more than $1 billion in unpaid debt to public universities and community colleges.

But some representatives say money isn't everything, that the program helps students in their districts. State Rep. Jim Sacia, R-Freeport, said he receives almost 80 to 90 applications each year he awards the waivers.

Despite opposition, the bill passed comfortably in the House on a 79-25 vote and continues to receive the support of House Speaker Michael Madigan, D-Chicago, Gov. Pat Quinn, Senate Republicans, and BGA.

"I applaud the members of the House for voting the end of the legislative scholarship program," Quinn said in an written statement. "I urge the Senate to pass this legislation swiftly."

That encouragement may not be enough in the Senate, where similar bills have never made it out of committee. And the decision to hear Crespo's bill on the Senate floor is in the hands of Senate President John Cullerton, D-Chicago. Cullerton has said he would rather see the program reformed than abolished.

Crespo is hopeful anyhow. Since 2010, all Senate Republicans have stopped handing out the waivers, and he has seen a number of Democratic senators agree to sponsor his bill.