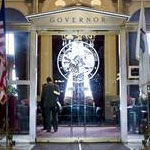 SPRINGFIELD — Illinois lawmakers say they want to hear more from Gov. Pat Quinn than just talk about jobs — they want a plan.

SPRINGFIELD — Illinois lawmakers say they want to hear more from Gov. Pat Quinn than just talk about jobs — they want a plan.

Quinn is expected to make employment a cornerstone of his State of the State address at noon Wednesday.

"Gov. Quinn will lay out an ambitious agenda for creating jobs and paving the way to long-term economic growth," said Annie Thompson a spokeswoman for Quinn.

But the governor is going to need more than just talking points to win over lawmakers, including many of his fellow Democrats.

"One of the issues we have, as a state, is that we're not considered to be too business friendly," said state Rep. Jerry Costello, D-Smithton. "That's an image that we have to change."

Costello, who represents an area that stretches from Metro East to Pinckneyville, is quick to caution that if Quinn wants to create jobs, those jobs must come from the private sector.

"The government cannot support employment for all," Costello said.

Todd Maisch, vice president for government relations at the Illinois Chamber of Commerce, which promotes the interests of businesses in the state, agreed.

"We have to give the governor credit. He is willing to engage CEO's. But we want to see him get outside of his comfort zone and engage employers on many levels," Maisch said.

Maisch said he too wants to hear "concrete plans" from Quinn.

"In my district, we have the lowest unemployment in the state of Illinois, and that's not an accident," said Jacobs. "We have kept our companies strong. And that's the one thing we need to focus on, we're not in this alone."

The unemployment in the Quad Cities, which includes East Moline, is at 7.8 percent, according to the Illinois Department of Employment Security.

Republicans have less faith in the governor's message.

State Rep. David Leitch, R-Peoria, said Quinn has not done enough to make Illinois the kind of place companies want to move to or expand in.

"I would say the administration has a lot to learn about what it takes to make businesses grow," said Leitch.

Nationally, the jobless rate dipped to 8.5 percent in December. New unemployment figures will be released Friday.

All told, the state lost 400,000 jobs during the Great Recession, according to the Illinois Department of Employment Security.

State Sen. Dave Syverson, R-Rockford, said Illinois could add thousands more jobs, if the governor would sign legislation to allow new casinos to be built in the state.

Lawmakers approved that plan in May, but have been holding it as they try and negotiate a compromise with Quinn, who does not like the legislation's carve-out for slot machines to be placed at horse racing tracks.

Rockford is one of five cities hoping for a new casino, but Syverson said he fears the governor's job message will not include a pledge to sign that pending casino legislation.

"Clearly in the Rockford area, it is a concern," said Syverson. "Because if Rockford doesn't (build a casino) and Beloit, Wis., does, two minutes away, it would have a devastating effect."

Thompson said in addition to jobs, Quinn will address the Illinois' pension and Medicaid shortfalls during his State of the State address in the Illinois House Chamber here.