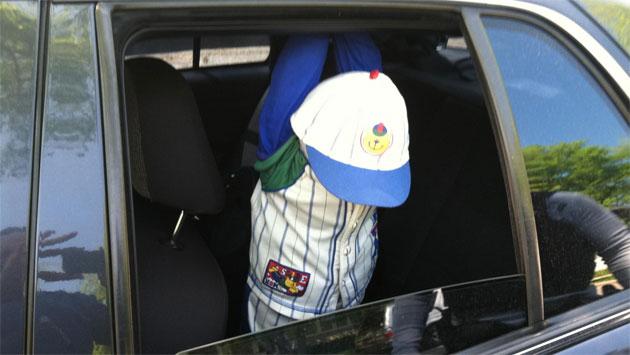 An attorney for Ava Thompson Greenwell filed a federal court lawsuit this week claiming her son's civil rights were violated when he was briefly detained by police invesigating a burglary in their neighborhood Aug. 30.

The lawsuit, filed Sunday by attorney Christopher Cooper, alleges that Evanston Police Officer Mark Buell knew that 13-year-old Diwani Greenwell did not match the description of the burglary suspect when he held and handcuffed him outside the family's home.

The complaint, which names both Buell and the City of Evanston as defendants, seeks damages for alleged unreasonable search and seizure, false imprisonment, assault and failure by the city to supervise and train Officer Buell.

The complaint includes images from a Facebook page that it claims was created by Officer Buell that the suit alleges are offensive.

One of the images (reproduced above) shows what the suit says appears to be a child tied by the hands and dangling from the inside roof of what the suit claims is an unmarked Evanston police car.

City officials offered no immediate comment on the suit.

Several Evanston aldermen previously had apologized to Greenwell at a City Council committee meeing over the incident, although it was not clear whether their apologies went beyond regret for the inconvenience she and her child suffered as a result of the incident.

The aldermen had urged her to take part in the Police Department investigation of the incident, which has not yet been completed.

In 1996, the Chicago Tribune reported, Buell was injured on duty when he was beaten by a 15-year-old youth during a disturbance in the 1900 block of Jackson Avenue that escalated into a battle between 20 police officers and 100 residents.