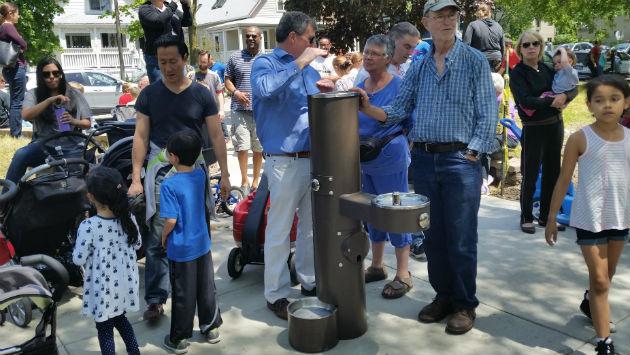 City Manager Wally Bobkiewicz, standing near a new $15,000 water fountain just installed at Penny Park, said today that testing of older water fountains in parks across Evanston has turned up some that will need to be repaired or replaced because of high lead content in their water.

Bobkiewitz said he anticipates having the tests completed by the end of next week, and that residents should expect to see some fountains shut down, at least temporarily, as a result of the tests.

Last fall the Chicago Park District shut off about 18 percent of the drinking fountains in Chicago parks after finding high lead levels in tests.

The new fountain at Penny Park has a couple of features you may not have seen before. In addition to a handicap-accessible fountain for people, it has a base-mounted fountain for dogs and a covered section at the top where park-goers can fill their water bottles.

Bobkiewicz says, “I have asked Public Works staff to ensure the final 32 fountains remain off until testing is received back on the lead levels of those fountains.

“Once the testing is complete, staff will report results of those fountains out of service and not in compliance to the City Council along with plans for replacement,” Bobkiewicz says. There are some funds already budgeted in FY 2017 budget for water fountain replacements based on City Council discussions last fall.