Northlake-based Farmer's Best Markets owner Nick Merikas says he now has a signed lease for the old Osco drug store building at Asbury and Oakton and plans to open the store in about five months.

The Osco, shortly before it closed in July 2006.

Merikas says the Evanston store will feature organic and conventional produce, hot foods and a deli with about 250 different cheeses.

He says the family-owned store will also have a prime meat department, regular and organic dairy products and imported wine and beer along with a selection of imported and domestic groceries.

Alderman Ann Rainey, who represents the 8th Ward store site, said she's excited that a new use for the property seems to be on track, after several other proposals for the property fell through in the nearly two years since the store closed, shortly after the free-standing Osco stores were acquired by competing drug chain CVS.

CVS, which already operated a store a half mile south at Howard and Asbury, chose to shut the Oakton store, and early hopes that a Trader Joe's might move in were dashed when that chain rejected the site. 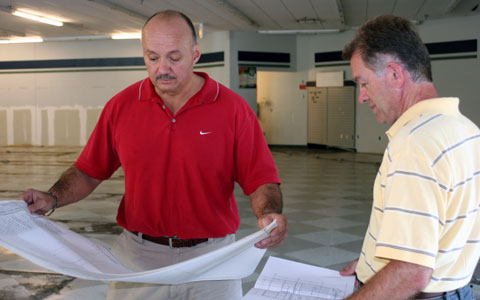 Owner Nick Merikas, left, met with architect Nicholas Karras at the store this afternoon to review plans for the remodeling project.

Merikas says he plans to schedule a community meeting for neighbors to discuss the store project within the next few days.

He says the store, at about 15,000 square feet, is smaller than the 20,000 to 28,000 square feet that would be ideal for the specialty market use and that parking on the site will be tight, but that he's been very impressed with the positive response from the community to the project.