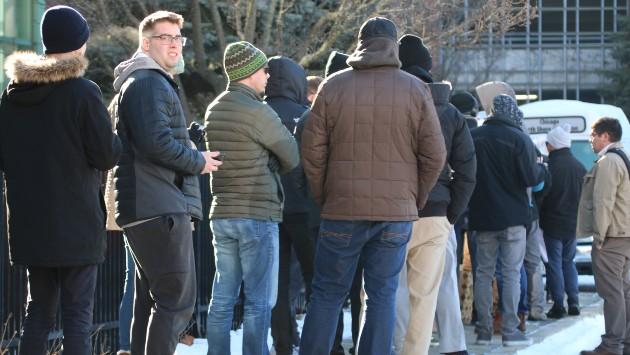 A crowd of a few hundred people hoping to be among the first to buy recreational cannabis legally in Illinois lined up this morning in downtown Evanston.

Police and private security guards kept the customers for the MedMen cannabis dispensary from blocking the sidewalk on Maple Avenue.

Instead they were lined up in the breezeway between the city’s Maple Avenue garage and the Hilton Garden Inn hotel, with the line then extending along the back side of the hotel up to University Place.

It appeared it could be a long, cold wait for many in the crowd as the temperature stood at 30 degrees when the dispensary, at 1804 Maple Ave. opened for business at 10 a.m. Many were already holding red MedMen tote bags they hoped to be able to fill with cannabis products once they got to the head of the line.

The City of Evanston hopes to fund its planned reparations program for black residents from revenue generated by a 3 percent municipal tax on legal marijuana sales, but that tax doesn’t take effect until July 1.