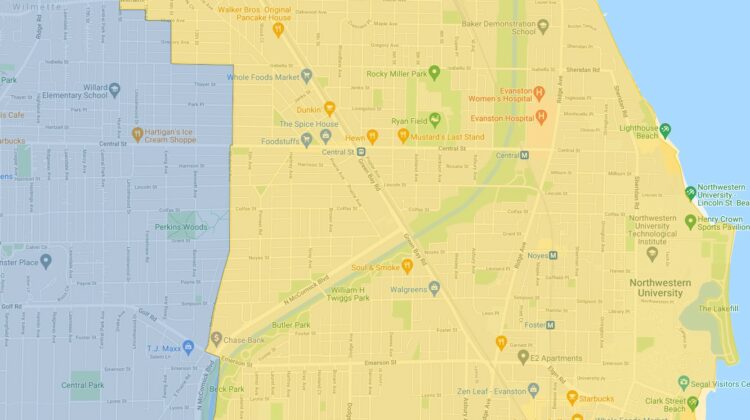 The new boundary between the 1th and 18th districts in north Evanston.

The new maps set the boundary between the two districts at McDaniel Avenue. The current boundary is further east — and formed by Green Bay Road, the North Shore Channel, Dodge Avenue and Emerson Street.

The change means more of north Evanston will be represented by Rep. Robyn Gabel and less by Rep. Jennifer Gong-Gershowitz, assuming both are reelected in 2022 — the first election in which the new district boundaries will apply.

An earlier redistricting map, based on American Community Survey data rather than final 2020 Census figures, moved only the 5th Ward segment of the existing district from the 17th to the 18th District. Final census data showed that Evanston had more residents than had been estimated by the ACS.

In south Evanston the new boundaries mean that State Rep. Kelly Cassidy’s 14th district will lose the narrow sliver of Evanston that it currently includes and Gabel will pick up a slice of Chicago’s West Ridge neighborhood, including Indian Boundary Park.

The new district maps now go to Gov. J.B. Pritzker for his signature.