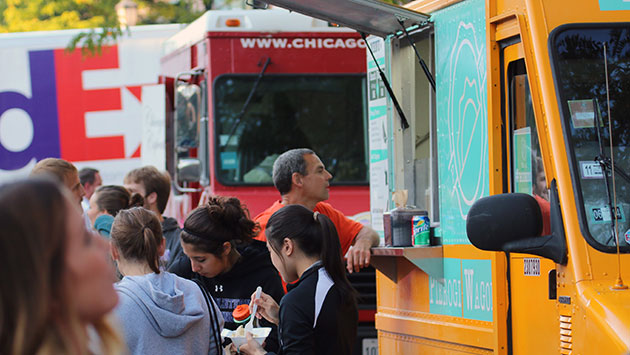 Food trucks at a 2016 event in Evanston.

To the Evanston City Council:

In 2007 and 2008, I joined hundreds of Evanston residents in developing the Evanston Lakefront Master Plan, which was unanimously adopted by the City Council in 2008.

One of the primary goals of the Plan, which was developed and adopted with widespread community support, is to emphasize “a balance between natural unprogrammed lakefront with a variety of lakefront appropriate activity programming to engage all users and generate limited revenue, while honoring the lakefront’s environmental integrity and surrounding neighborhoods.”

As part of that goal, the Plan notes that, while there is public support for “minor concession facilities,” those are defined as offering “prepackaged or refrigerated foods, drinks, and necessities such as sunscreen, while excluding significant facilities such as grills or kitchens.”

So I was shocked and angered to learn that, unlike previous City Councils, this Council is considering two proposals that would completely violate the Plan and the will of Evanston residents upon which the Plan is built.

The proposals to allow food trucks on the lakefront and to require non-residents to pay for parking are ill-advised, and the Council’s push to approve them without proper study or extensive input from staff, residents and especially affected neighbors, demonstrates a recklessness and a “we know better than our constituents” attitude that is irresponsible and shameful.

Here are just some of the questions that demand to be answered before these proposals should be considered:

The food-truck proposal in particular is an alarmingly slippery — in this case, greasy — slope that would open the door to a commercialization of our precious lakefront that could all too easily result in a KFC at Lighthouse Beach and a Portillo’s in Centennial Park.

Many of you ran for office this year on a pledge of protecting and preserving the lakefront, as well as a promise to represent your constituents. I strongly urge you to keep your word and defeat these two proposals.