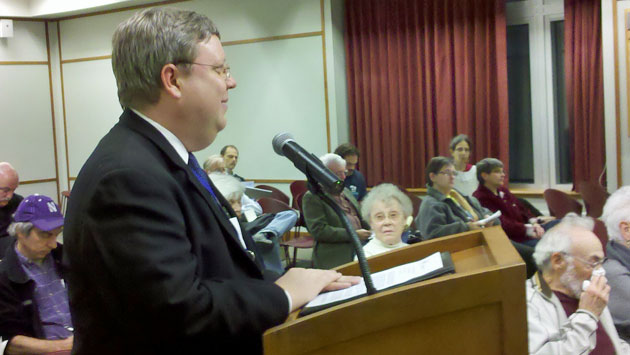 Evanston's Library Board Wednesday night accepted a last-minute proposal from the city manager for a transition plan to avoid a possible confrontation over the board's assertion of taxing powers.

City Manager Wally Bobkiewicz proposed that the board postpone plans to levy taxes for another year and that in return he would urge the City Council to consider an ordinance early next year that would give the board the power to hire and fire the library director and to set a tax levy for library operations starting with fiscal year 2013.

In the meantime, he said he would recommend that the City Council fund library operations for next year from the general fund at a level $140,000 greater than the city's proposed 2012 base budget.

He also said the library would not have to come up with its own money in 2012 to pay rent on the north branch building or for $20,000 in city overhead charges included in earlier budget proposals.

He said he would also ask the City Council to form a subcommittee to meet with library board members to work out details of making a transition to a new model for library operations. 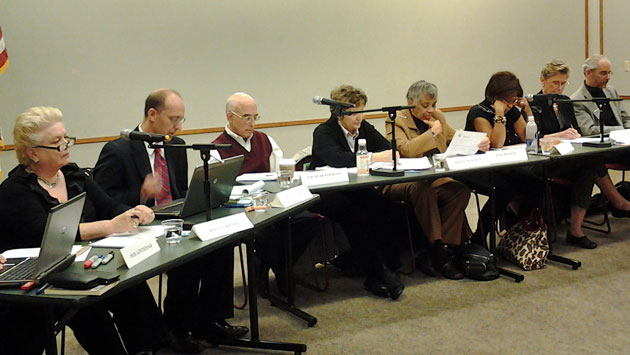 Top: Bobkiewicz presenting his transition plan. Above: Library board members reviewing the proposal.

"Thank you from the bottom of my heart," Newman told Bobkiewicz. "I appreciate your willingness to come here and put the proposal in writing."

Bobkiewicz noted that the library has operated as a city department with the director reporting to the city manager and the City Council setting its budget for at least the past half century.

For the past couple of years library board members have pushed to move to a model set forth in the state library code under which the board, appointed by the mayor, would set the budget and impose a tax levy on local residents.

He noted that while the city as a whole is proposing to eliminate 11 positions in next year's budget, the library has proposed to add a new neighborhood outreach coordinator position.

But Board Member Susan Stone said adding the outreach position was more prudent, "rather than opening three branches" as some board members might have preferred.

And Member Michael Tannen claimed the board has been "extremely frugal," not "irresponsible or profligate" as he said critics have claimed.

Bobkiewicz said the concept of a non-elected board levying taxes "has never happened in Evanston," and he suggested it might be a difficult idea for some aldermen to accept.

"But my intention is to do the best I can to sell this," the city manager said, "and I know the mayor and council appreciate hearing from you."

He argued that the vote by the board in favor of the plan "would send a signal to council that we are on a path to bring some of thse issues to resolution."