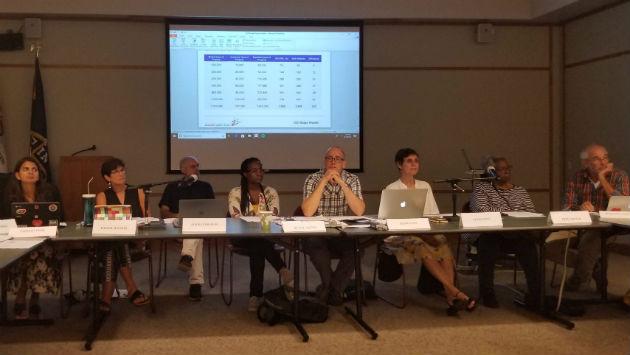 Members of Evanston’s Library Board appeared inclined Wednesday evening to not make any significant cuts in their proposed budget for next year, which calls for an 8.7 percent increase in spending.

That’s a jump more than four times greater than the current annual increase in the consumer price index.

The board had previously considered the possibility of closing its existing branch in south Evanston, at Chicago Avenue and Main Street, when the branch library at the new Robert Crown Center opens further west on Main Street early next year.

But board members Wednesday urged Library Director Karen Danczak Lyons to keep negotiating with the landlord of the CAMS branch for an extension to the library’s contract for that space, which is scheduled to expire at the end of this year.

The library has an option for a two-year extension of the CAMS lease, and board members are seeking to convert that to two one-year options with an early out clause.

But rather than eventually scale back to three branches, some board members indicated they would like to see even more branches opened, including one farther south in the city’s 8th or 9th wards and in the 5th Ward.

The library now has branches in the 1st, 3rd and 7th wards and will gain one in the 4th Ward when the Crown branch opens.

During public comment two speakers opposed closing the CAMS branch while one said it’s time to let go of that branch in favor of additional new branch locations.

The board is scheduled to adopt its 2020 budget at its next meeting on Oct. 16.

Because the library’s tax levy exceeds the cap approved by a voter referendum, the City Council could order a reduction in library spending. But it has refrained from doing that in recent years, except for rejecting a planned $10.5 million renovation project at the main library last year.

The proposed 2020 budget for the city as a whole is scheduled to be released on Oct. 4.