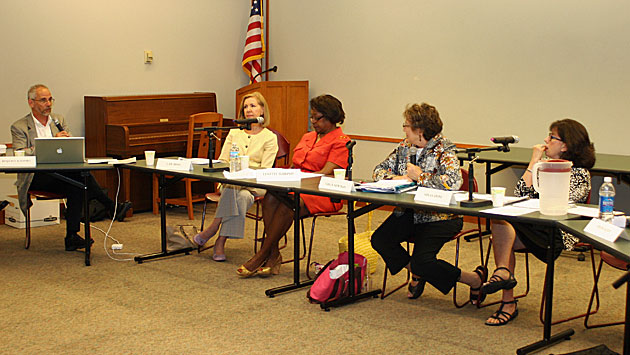 Of the members present who could still be on the board when it is scheduled to vote on the budget Sept. 21, it appeared Ben Schapiro and Susan Stone were leaning toward a 1 percent increase. That plan would close the north branch library but add a staff position to focus on neighborhood outreach across the entire community.

Gail Bush and Susan Newman appeared to favor a 4 percent increase that would keep the north branch open but not hire the community outreach person.

And Diane Allen favored a 6 percent increase, which would both keep the north branch open and hire the community outreach librarian.

Board member Lynette Murphy appeared to favor the 1 percent solution, but her term on the board ends Sept. 15, before the budget vote, and, having served two terms, she's not eligible for reappointment.

Two other board members, Sharon Arceneaux and Margaret Lurie, were absent from the meeting and the nine-member board has had one vacancy, following the resignation of Mildred Harris.

The appointment of Sergio de los Reyes, a construction project manager, to the library board was confirmed by the City Council last month, but he has not yet been seated.

The appointment of Michael Tannen, an attorney and activist with the Evanston Public Library Friends advocacy group is scheduled to be voted on by the City Council next week.

Mayor Elizabeth Tisdahl says Bush, whose first term expires before the scheduled budget vote, has asked not to be reappointed, but has agreed to continue to serve until the mayor selects a successor. 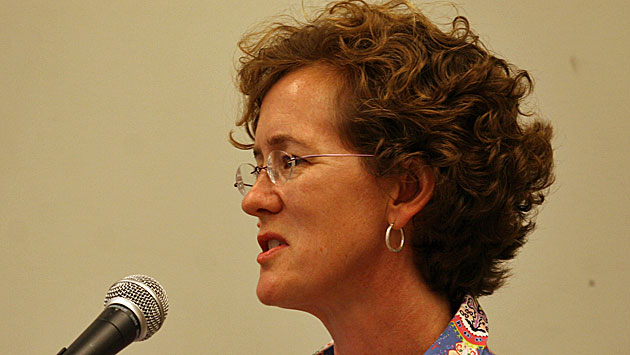 Top: Board member Ben Schapiro speaking during the meeting. Above: Alderman Jane Grover.

Several members of the Friends group once again urged the board to keep the north branch open. And they were joined by Alderman Jane Grover, 7th Ward, who called the north branch an anchor for the Central Street business district.

But two speakers newer to the debate said the community outreach position should be the higher priority.

Mary Beth Schroeder, of 2734 Asbury Ave., said the library "can't be focused just on bricks and mortar as a central way to provide service."

The library, she said, is woefully underfunded and needs to deploy its funds in the most efficient way to reach the entire community.

"The neighborhood services model, to reach seniors, and adults and children all across the city is the best way to achieve those goals," Schroeder said.

Dino Robinson, of 2121 Church St., quoted the library's founding charter from a century and a half ago as saying it was meant to reach out "to all classes of the community."

He said that the library needs to realign with that mission and provide equitable services across the city.

He argued that having the outreach coordinator would allow the library to collaborate with a wide range of community groups to spread literacy programs throughout Evanston and suggested that the approach would also be likely to be attractive to outside funding sources.

"Library funds should benefit all of Evanston in an equitable fashion, and not be funneled to a specific site," Robinson added.