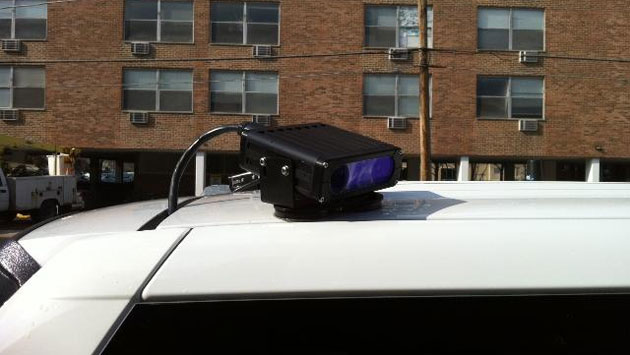 The police Tahoe with one of its newly installed  license plate recognition cameras.

The department won free use of the system for a year after winning the National Traffic Safety Challenge at the recent International Association of Chief's of Police Conference.

The system, provided by ELSAG North America, is installed in one of the department's Chevy Tahoe patrol vehicles.

The system uses automated cameras mounted on either side of the Tahoe to capture images of parked and moving vehicles it passes.

The computer attached to the cameras recognizes and reads license plates, storing digital pictures, a close up of each license plate and a wide-angle view of the car and plate.

The system is updated daily with data from state police about cars that are stolen and ones that may have been involved in traffic violations or criminal investigations. It can also accept additional data manually entered by police here.

The system also creates a record of the geographic location of each plate that's read, which police say they plan to keep for 30 days, in case a vehicle is later determined to be wanted for a crime.

The system can be used to locate vehicles that have unpaid parking citations, but Evanston police say they're not using it for that purpose.

Separately the City Council recently approved plans to acquire two similar systems for use by the city's parking enforcement officers.