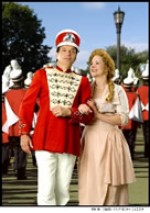 The day after Christmas Light Opera Works Theater opens The Music Man, a play about a con man who falls in love while attempting to fool the citizens of a midwestern town.

The story, written by Meredith Willson and Franklin Lacey with Meredith Willson writing music, book and lyrics, follows Professor Harold Hill’s attempt to swindle a small town by convincing the residents that he can start a boys marching band. His plan is spoiled when he falls in love with the town librarian.

Adams landed the lead role of Harold Hill. Adams has appeared in Light Opera Works productions of South Pacific, 110 In The Shade, The Merry Widow, The Sound of Music, and Kiss Me, Kate. Adams has perfor seen the inside of many theaters including the Theatre at the Center, Chicago Shakespeare Theater and Drury Lane Theatre and has has toured nationally with Andrew Lloyd Webber’s The Phantom of The Opera. 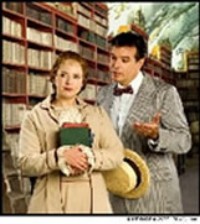 Alicia Berneche will take the role of Marian Paroo and has appeared last summer at Light Opera Works as Phyllis in Iolanthe, and previously as Sari Linden in Bitter Sweet and Resi in The Great Waltz. Berneche has performed extensively in the United States, including at the Lyric Opera of Chicago as Daisy Buchanan in The Great Gatsby at the Goodman Theatre and The Barbican, and BAM in the world premiere of Philip Glass’ Galileo Galilei, and was on the roster of the Metropolitan Opera. During this past season she performed Die Fledermaus with the Austin Lyric Opera and Orlando Opera, The Pirates Of Penzance with the Virginia Opera, as Despina in Cosi Fan Tutte at the Sarasota Opera and performed her first Mimi in La Boheme at the Skylight Opera Theatre.

Tickets for The Music Man range from $29 to $87. Ages 21 and younger are half price at Family Matinees. The show runs though January 4.

Light Opera Works is a professional not-for-profit heater founded in 1980.