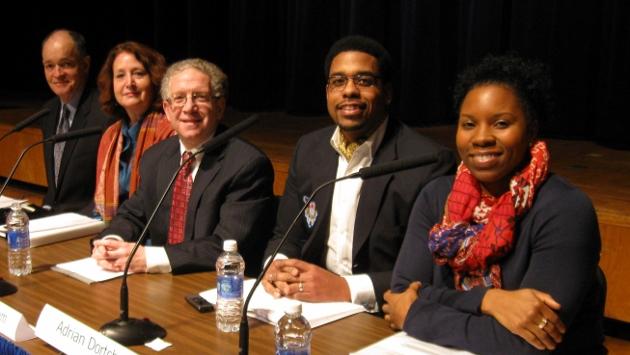 The forum was sponsored jointly by the League of Women Voters of Evanston, Evanston/Skokie PTA Council, and ETHS Parents Engaged.

Judging by the comments made by the candidates, the board is unlikely to face dramatic change after the April 7 election.

The board consists of seven members elected to a term of four years, but elections are held every other year. Four spots were open two years ago, while the other three are to be determined this year.

Two of the three incumbents, Mark Metz and Jonathan Baum, are up for reelection, joined by newcomers Anne Sills, Adrian Dortch, and Monique Parsons.

The message of all five was that they intend to maintain the school as one of the top high schools in the nation and that they are all focused on closing the perennial achievement gap between white students and African-American and Hispanic students.

Even so, they noted that statewide and national scores show that all three ethnic groups are performing better than their counterparts at high schools in the rest of the state and the nation.

The “Cradle-to-Career” initiative begun recently involving more than 25 governmental and not-for-profit organizations in Evanston won strong endorsement for its efforts to have a communitywide collective impact on the achievement gap by helping families engage their children in learning from the moment they are born.

Once they enter the public education channels at the age of five, Evanston’s two school districts are committed to collaborating to ensure there is a coordinated effort right on up through high school graduation and on to college or career.

Challenger Dortch, an ETHS graduate and former resident of Evanston’s Fifth Ward, said “education begins in the home; school is secondary. It’s the only way to close the achievement gap.”

Dortch, who is also running for a spot on the Evanston/Skokie District 65 School Board, was the only one of the five to call for consolidating the two districts into one.

Incumbent and former board president Metz noted that he is the only board member with extensive experience in business and finance.

Challenger Parsons said she, too, is committed to closing the achievement gap, but she agreed that it begins at birth, which means engaging parents early on. “The high school alone cannot remove the gap,” she declared.

All five candidates recognized that the board is likely to be challenged financially as a result of possible actions taken at the state level. Baum noted that the board has little power to affect its revenues, which means that every program needs to be subjected to close financial scrutiny.

Sills, who said she brings 34 years of education advocacy to the board, said the state has primary responsibility for financing education, but said that any reductions “need to be as far away from the classroom as possible.”

Top photo: Candidates Metz, Sills, Baum, Dortch, and Parsons await the beginning of the forum in the ETHS auditorium.