Mayor Daniel Biss praises outgoing City Manager Erika Storlie for her distinguished and lengthy service she’s given to the city. Praises her efforts in running the city during the pandemic.

Says as a new mayor her relied heavily on Storlie and will never forget that.

Says Evanston is a place of unlimited potential.

Mayor says 1:15 per commenter to fit 40 people into the 45 minutes allotted.

Dave Stoneback, public works director, says the water rate increase proposed for next year would be the first in six years. Lays out rate schedule into the future. 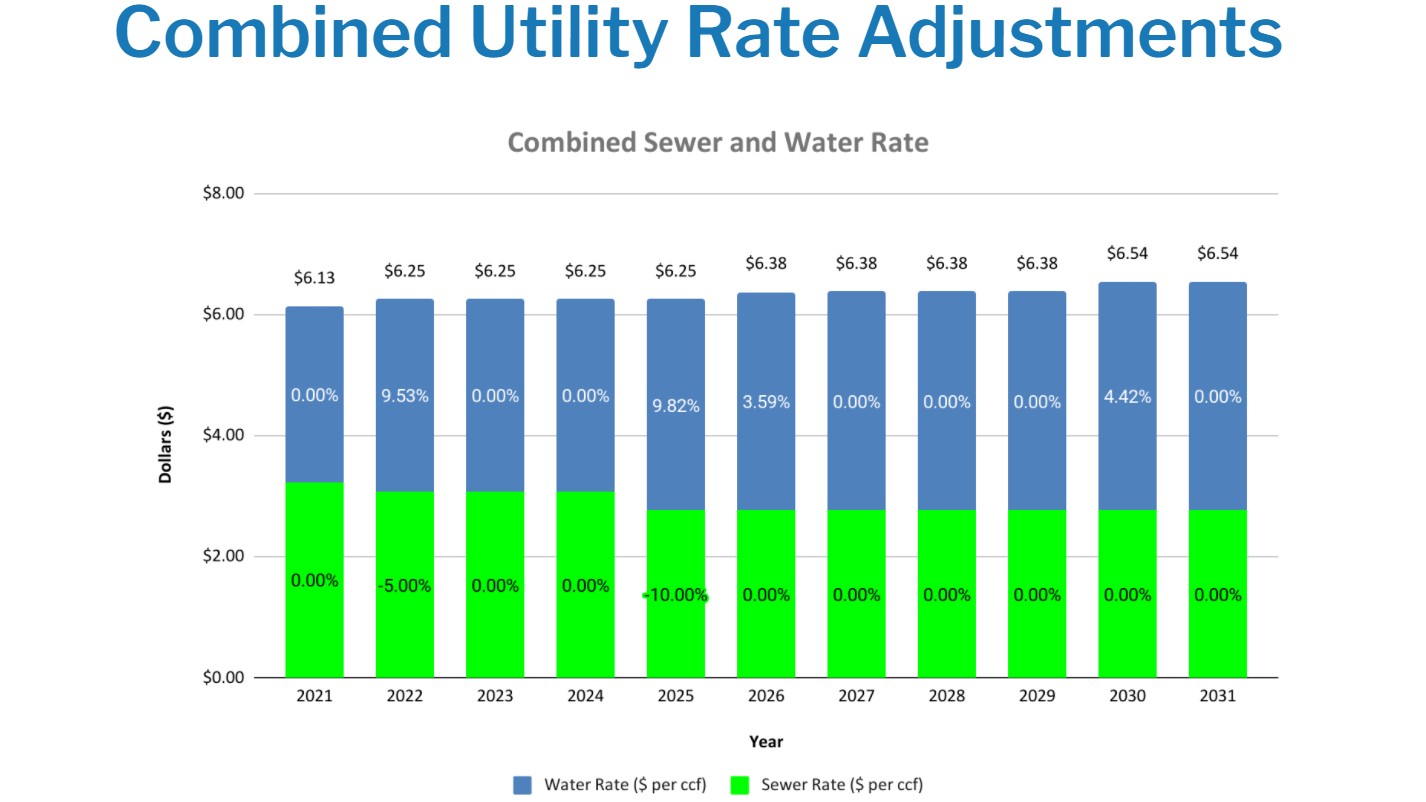 Total cost of planned new water intake project is $41.6 million. Says it will be paid for by the city’s wholesale water customers. Says the latest clearwell project actually generates $1.8M a year in new revenue from wholesale customers while the city’s financing cost is just $1.1M.

Unfortunately, he says, a lot of retail distribution projects can’t be charged to the wholesale customers — more than $24M in expenses ahead on that front.

Ald. Devon Reid (8th) asks about how the affordable rate would work for renters. Stoneback says may end up sending out checks. Reid suggests ban on water shutoffs. Says city subsidizes parking, could figure out how to subsidize water.

Ald. Peter Braithwaite (2nd) asks for list of shutoffs. Says there are other subsidy programs available — including general assistance.

Ald. Jonathan Nieuwsma (4th) asks about a tiered rate structure for water. Stoneback says plans to do a cost of service study. Notes that the affordable rate plan is expected to cost about $225K per year — concerned about the long-term cost of that.

City Engineer Lara Biggs says the legal issues around that are complicated and access would be expensive to create.

Wynne opposes Clark Square Park use. Says if can’t come up with Lincoln Street as a solution should probably give up on finding one.

Ald. Cicely Fleming (9th) says she thinks Clark Square would be a good dog park location. Says park is large enough to accommodate a dog park and other uses.

Kelly suggests maybe just fall and spring at Lincoln Street beach, when it’s not used so much by NU students.

Reid says he’s supportive of the project, wants to also be financially responsible to taxpayers.

Kelly asks about cost per square foot. (Base cost shown is about $733 per square foot — but staff says that includes exterior site work, temporary shelter space and other costs that aren’t typically included in a construction cost-per-square-foot calculation.)

Revelle says she shares Nieuwsma’s ideas about sizing and CARP goals. Says having the surgical space for spay and neutering would help reduce stray animal issues.

Wynne agrees with Nieuwsma and Revelle.

Fleming says he price difference between level 1 and 2 isn’t that great. Concerned about having reserves for repairs. Would be willing to eliminate the 1% for art — doesn’t think public art in front of animal shelter is necessary.

Biggs says the ordinance calls for “up to” 1% for art. Fleming says she votes for zero percent.

The “2 B” plan (which most council members seem to be lining up behind) is estimated to cost $6.3M — of which the city would have to come up with $3.3M.

Reid ask whether city is on the line to make up the difference if the animal shelter association can’t come up with the $1M private fundraising goal. Biggs says yes.

Biggs says need to make a decision about the funding level in about a month, when staff will be bringing forward a contract for the design

Consent agenda with those deletions approved.

A1 – BMO Harris credit card activity
Approved 7-0-1. Suffredin abstains. Nieuwsma was out of the room.

A3 didn’t advance from committee.

A7 – Equipment purchases, including an ambulance for fire department
Also two buses for Parks & Recreation.
Approved 9-0.

A13 – Allocation $850K in ARPA funding to 2021 equipment replacements
Nieuwsma says wants to come up with overall plan for ARPA spending before acting on this item.
Storlie says doing it this way would reduce general obligation debt. Don’t have any other obvious substitute funding source.
But she says could potentially table it until second meeting in October.
Mayor says will have a special meeting a week from today to focus on ARPA.

A14 – A17 — Five/Fifths TIF
Burns says the intergovernmental agreement was proposed by city staff. Says D65 representative at the joint review board meeting voted to approve the TIF.
The legal counsel for the city urged mutual considerations between the D65 and the city in the intergovernmental agreement. Says D65 weakened those. Says still working on terms of the agreement. Says the TIF, by state law, requires a contribution by the city to the district if the student population increases.

Says 28% of the population of the TIF is under the poverty line — needs affordable housing units and workforce development training that the TIF can provide.

Reid says he doesn’t generally support TIFs, but thinks this area could use one. In past city has tended to give TIF funds to large developers, he says, so understands the opposition.

Braithwaite says the moving Black people out claim is a myth. Says Evanston Plaza development involved $2 million investment and it’s helped transform the plaza from a property that was 68% vacant to 90% occupied — and nobody moved away because of the improvement of the plaza.

Moves to table until Oct. 25 … in hopes of having an intergovernmental agreement with District 65 by then. Suffredin seconds.

Motion to table is approved.

Wynne asks for documentation of city’s revenue sharing with the school districts from other TIFs and what the tax increment increase was with the last three TIFs that have closed.

Reid says wants to see a commitment from D65 to build a school in the 5th Ward.

Paul Zalmezak, economic development manager, says the delay doesn’t change much in terms of how the TIF is implemented. Says is important to get it to the county by some future date he doesn’t mention.

R1 – Code of Ethics amendments
Reid says he will vote no. Need to do more to strengthen ethics board.
Kelly says it’s a weakened form of an ethics board — not strengthened — board needs more independence.
Approved 7-2.

Council votes to go into executive session re litigation and closed session minutes.