Kelly Gandurski, interim city manager, says that after ARPA funds are exhausted, the city would be faced with a $2 million annual deficit, with just the additional positions in the initially proposed budget.

Mary Rosinski says spending is increasing dramatically, and if interest rates go up “we’re really going to be screwed.”

Mayor Biss announces that Fraternal Order of Police patrol unit and firefighters union have reached an agreement on the city’s vaccination/testing requirement.

Kate Lewis-Lakin, budget coordinator, says latest update to proposed budget increases total from $355M to $360M.
This staff proposal calls for adding 11 positions of the 20-plus that were proposed by department heads. 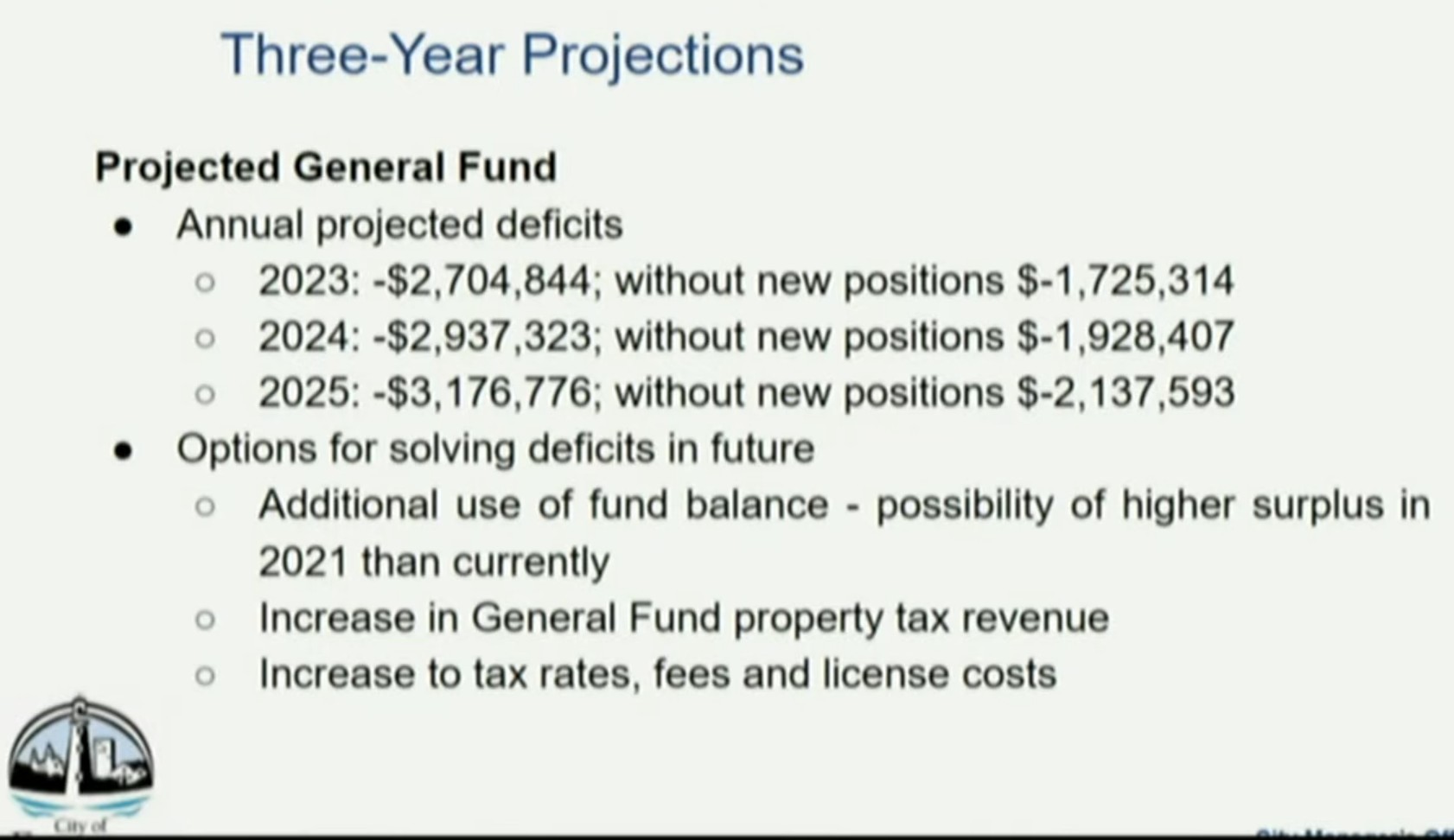 Ald. Cicely Fleming (9th) says she’s concerned that there are so many unanswered questions. Concerned about moving ahead with budget tonight.

Suggests having ETHS pay the cost of the two police officers now assigned to the school. Suggests those officers could be be responding to calls in the community instead.

Mayor Biss says to get the budget approved by statutory deadline need to at least vote to introduce the budget by the next meeting, two weeks from now.

Biss says there’s the policy question and the budget question. Keeping officers on duty and still paying them doesn’t have a budget impact.

Gandurski says some of the requested additional positions that didn’t make the latest cut could be added in at mid-year once there’s a better idea of how revenues are going.

Ald. Devon Reid (8th) says should leave it to a permanent city manager to make decisions about proposed new hires.

She also proposes moving up the capital improvement schedule for renovating Independence Park on Central Street so that design work at an estimated cost of $90,000 would be done in 2022 and construction in 2023. (Says the project has already been scheduled for 2023.) Ald. Melissa Wynne (3rd) seconds that.

Fleming says she strongly opposes that idea — says park scorecard a few years ago prioritized park repairs based on which ones are in the worst shape. Says she’s been waiting her turn on parks in her ward.

Parks Director Lawrence Hemingway says some parks have become hazardous since the parks scorecard was developed in 2016. Says the playscape at Independence Park has been determined to be too hazardous for use.

Fleming says she’d like to get an update on the condition of parks in her ward.

Ald. Bobby Burns (5th) says Perry Park has similar problems — would like another pass at parks in his ward.

Nieuwsma says how about parks in his ward.

Gandurski says will ask Hemingway to reprioritize parks in all the wards.

Corporation Counsel Nicholas Cummings says the city has an intergovernmental agreement with ETHS that runs through June 30, 2024, but that the school district does not reimburse the city for the cost. So reassigning SROs would not achieve any budget savings.

Ald. Melissa Wynne (3rd) says she thinks all of the 11 new positions called for by staff are important — need them to provide the services residents expect and make the city operate better.

Costs do go up and it is expensive to live in Evanston, she says. Waiting for a new city manager undermines all the work the staff has done. “That would mean we’d be living with crippled city services and I don’t want to do that,” she says.

Ald. Peter Braithwaite (2nd) says the it would be foolish to remove the SROs at the high school — that they provide an important service.

Says overall, with staff stretched so thin — Council needs to respond and provide the additional positions requested. Says he fully supports the additions.

Says waiting for a new city manager to make decisions would be a foolish idea.

Fleming says she’s not going to vote to raise property taxes to continue to fund these positions.

Kelly wants to wait until have permanent city manager and head of HR — to not fill 29 held vacant and 11 proposed new positions.

Cummings says hiring and firing of city staff is up to the manager — its up to City Council to decide what the budget is.

Reid says Kelly instead should eliminate the positions and do a budget amendment later to add them.

Wynne says its going to take city staff a period of time to hire the new people. Says the heaviest time, for example, for permit activity starts in April — need to authorizing hiring of the people now.

Kelly moves to remove the 29 frozen positions and the 11 new positions from the budget. Reid seconds.

Motion fails 8-1. Only Kelly votes for it.

Fleming moves to remove payment for SROs from the budget.

Cummings says the city could do it, but then ETHS could sue the city.

Motion doesn’t get a second.

Motion to introduce the budget ordinance carries 5-4 with Kelly, Suffredin, Reid and Fleming voting no.

SP2 through SP9 – Tax levy ordinances.
All are for introduction, except SP9 is for action.
Approved 5-4. Kelly, Suffredin, Reid and Fleming vote no.

Wynne says will save money doing the work in-house.

Approved 7-2. Kelly and Fleming vote no.

Braithwaite says makes absolutely no sense to have to bother with that.

Approved 8-0-1. Braithwaite says he abstains “on the basis of stupidity.”

Fleming says she doesn’t support the proposal. Validating to go to church sounds absurd, she says. Should be free on Sunday. Says city is relying too heavily on parking fees.
Braithwaite says he favors charging for the first hours. Suggests leaving Sunday free.

Wynne suggests trying the $1 charge for the first hour, but wants to keep Sundays free.

Burns suggest cutting the free period to 30 minutes from an hour.

Kelly says its the wrong time to do this — when trying to support local businesses.

Reid suggests charging just $1 for parking on Sunday for any duration.

Nieuwsma moves to keep free parking on Sunday in the garages. Revelle seconds.
That passes unanimously.

Biss asks what’s the connection between parking fees and economic development — and what impact is on small businesses downtown?

Paul Zalmezak, economic development manager, says city recently hosted a planner from CMAP, who said there’s no such thing as free parking. Says its not good public policy to provide free parking. Says there is price-sensitivity, if its priced too high can be deterrent.
Says in Evanston its a never-ending debate. In Evanston have done free holiday parking, for the merchants’ benefit.
Have also talked about charging fees to get turnover to bring more business.

Says low cost parking overall is not a deterrent to business.

Vote on A3 as amended is also 8-0. (Suffredin has left the meeting.)

A 22 – Raising fines for certain safety-related parking violations
Fails on a 3-5 vote. Kelly, Burns and Reid voted in favor.

Fleming expresses fear it will set a precedent for paying businesses whenever there’s a construction project that causes disruption.

Braithwaite says EDC had very lengthy discussion about the issue. Says were complications due to COVID — and construction continued the problems.

Nieuwsma says he will support the measure, but shares Fleming’s concerns. “No pandemic, no funding,” he says, regarding future construction disruptions.

Fleming says the pandemic is still going on — could have new claims.