A developer plans to build seven live-work townhouse condominiums on the northeast corner of Lake Street and Ashland Avenue in Evanston.

A model of the project, looking northeast from Penny Park.

The proposal, reviewed by the city’s site plan committee Wednesday, would restore a small commercial district at the intersection that was once anchored by a neighborhood grocery store later turned into a church and a row of storefronts that included the Drummer Drapery shop.

Those buildings were demolished last year.

Developers John Cunningham and Tom Engel say the new three-and-a-half story units, three facing Lake and four facing Ashland, would have retail or office space on the first floor with living space above. 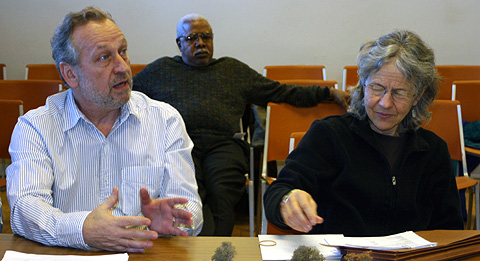 The property is zoned B-1 which permits the combined commercial and residential use.

Community Development Director James Wolinski said, "It would have been so easy to ask to rezone the land to R4 and jam a large number of townhouses on the site. To retain the commercial character with live-work is really exciting. I can’t think of a better use for this property."

The site is diagonally across the street from Penny Park and the Lake Street side faces the Seattle Sutton shop at 1424 Lake St.

The developers say they plan to include an elevator in each unit to make them more accessible.

Each unit will have kitchen, dining and living room space on the second floor, two bedrooms and two baths on the third floor and an additional bedroom with bath and outdoor deck on the fourth floor.

The units are expected to sell for under $800,000. Because no zoning changes are required, construction could start as early as next month.