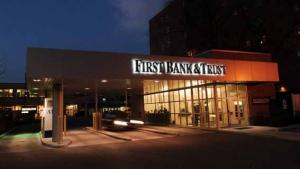 Robert R. Yohanan, managing director and chief executive officer, credited the growth in loan volume to new business efforts that “proved most productive” in his quarterly letter to stockholders.

But he noted that loan margins “have continued to suffer from extremely keen competition for commercial and industrial loans.”

Nevertheless, the bank was “fortunate to operate with very few problem loans, very good liquidity and capital, and an excellent pipeline of prospective businesses,” he wrote.

On the balance sheet for Sept. 30, loans this year, net of an allowance for loan losses, amounted to $591 million, compared to $533 million a year earlier. While commercial and real estate loans climbed 16.1 percent and 17.5 percent, respectively, home equity and consumer loans were slightly lower.

Deposits, however, increased in all reported categories, totaling $766 million vs. $696 million, for a year-to-year increase of about 10 percent. Total assets climbed about 9.5 percent, from $771 million to $844 million.

Without giving specific figures, Yohanan said that the bank’s Trust/Investment Department’s performance was “exceptional,” with assets under management and earnings “at historic levels.”

He cautioned that returns “continue to suffer due to the extremely low interest rate environment brought on by the Federal Reserve’s policy of quantitative easing and a weakened but improving economy.”