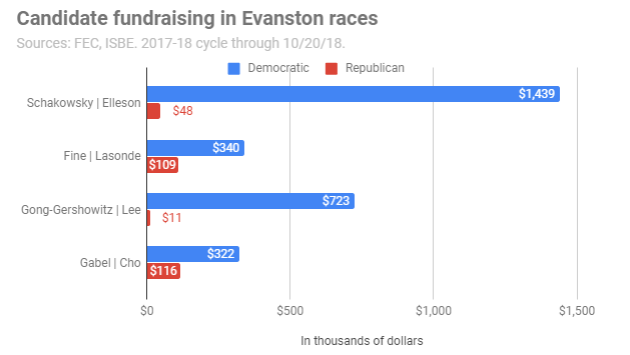 Early voting starts Monday, and if campaign dollars were votes, Democrats would be absolutely assured of victory in contests to represent Evanston districts in Washington and Springfield.

The closest contest in the fundraising sweepstakes is in the 18th State House district, covering the eastern portion of Evanston, where Republican challenger Julie Cho has raised just over one-third as much money as incumbent Democrat Robyn Gabel.

Next is the 9th State Senate race where Joan McCarthy Lasonde, the Republican seeking to fill the seat being vacated by Daniel Biss, has raised just under one-third the money raised by Laura Fine, who’s seeking to move up from the State House.

In the 17th State House district, Fine’s old district, which includes northwest portions of Evanston, Democrat Jennifer Gong-Gershowitz has faced only token opposition in the general election from Republican Peter Lee, although she had to spend big to win the five-way primary.

And to represent the 9th District in the U.S. House, long-time incumbent Democrat Jan Schakowsky has not faced a meaningful fundraising challenge from the largely self-funded Republican, John D. Elleson.

In the 14th State House district, which includes a sliver of south Evanston, Democrat Kelly M. Cassidy is running unopposed.

(The Democrats’ fundraising lead is not as overwhelming as it has been in some years. Compare the picture this year to how things looked in 2012.)