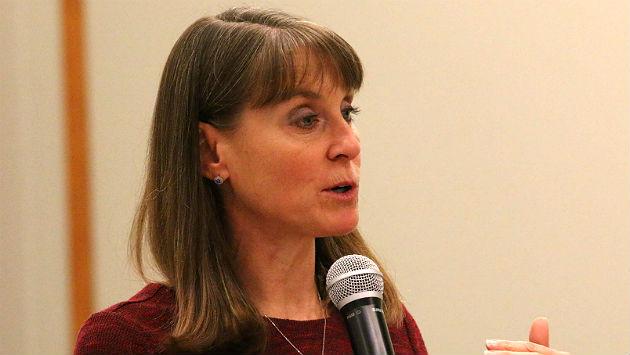 Three state lawmakers who represent Evanston painted an upbeat picture of the state’s future during an appearance at the Evanston Public Library Thursday evening.

State Sen. Laura Fine said that after all that the legislature accomplished in the just-ended session, “We are going to be the state that everybody wants to live in.”

The legislature, she added, is “making so many decisons to bring our state forward.”

State Rep. Jennifer Gong-Gershowitz said, “There was just a can-do spirit this session on both sides of the aisle, with both Democrats and Republicans coming to the table.”

She said members of the two parties “were often disagreeing passionately, but respectfully and with the dignity that the office deserves.”

She noted the passage of legislation to fund “both horizontal and vertical infrastructure” — to repair crumbling roads and bridges and to fund new buildings in communities across the state.

She said the new construction would be paid for in part with increases in the gas tax and by more efficiently collecting sales tax owed on purchases from out-of-state businesses as well as by legalizing sports gambling and opening new casinos, including one in Chicago.

State Rep. Robyn Gabel said that as part of the $40 billion general fund budget the lawmakers set aside $1 billion to start paying off the $7 billion backlog of unpaid state bills.

She added that the new budget provides the first rate increases to agencies that provide mental health and other community services since 2008.

The legislature also cleared the way for voters to decide in 2020 whether they want to amend the state constitution to switch from a flat to a graduated state income tax.

Fine noted that 34 states now have a graduated income tax while seven, including Illinois, have a flat tax and nine impose no state income tax.